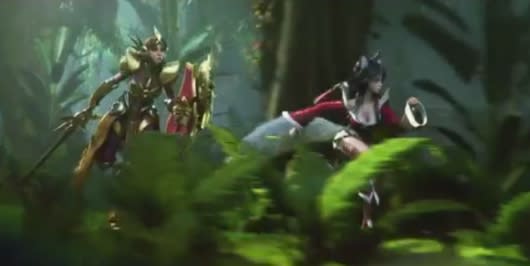 Did you know that a game of League of Legends involves your team fighting another team? It's true! And you can watch a dramatized version of exactly that in the game's latest cinematic trailer, A New Dawn, embedded just past the cut. Spoiler warning: There is blood, people die, and it would all be very dramatic if not for the fact that most of them will respawn in the not-too-distant future.

Want a peek behind the scenes? You can get more than that; Riot Games has also released a full making-of featurette that shows exactly how the newest cinematic went from concept to completion. And you can also check that out past the cut. Consider it the bonus feature.

In this article: backstory, f2p, free-to-play, league-of-legends, lol, lore, making-of-video, moba, news, news-items, riot, riot-games, trailer, trailers, video, videos
All products recommended by Engadget are selected by our editorial team, independent of our parent company. Some of our stories include affiliate links. If you buy something through one of these links, we may earn an affiliate commission.