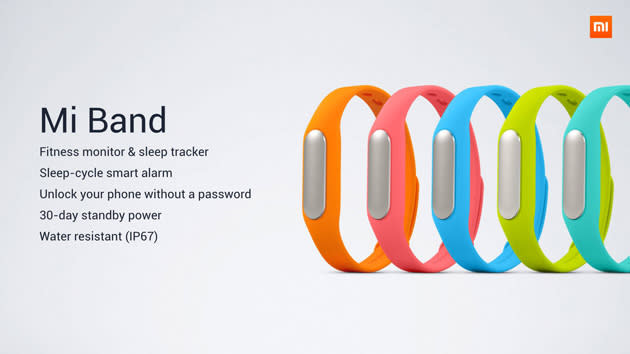 The "one more thing" at the Xiaomi Mi 4 launch was the Mi Band, the Chinese company's first smart wearable, and it's obviously aggressively priced: Just CN¥79 or about $13! Like many of its competitors, the Mi Band tracks your movement (walking or running) plus sleeping pattern, and you can also use it as a smart vibrating alarm to wake up feeling better. Interestingly, a single charge on this waterproof device will last up to 30 days, which easily beats its competitors that tend to last for a week or less. Better yet, the band doubles as a security token that automatically unlocks your phone -- likely just Xiaomi's for now -- when within proximity. There's no word on availability just yet, but as always, Xiaomi should be debuting this in China where it'll instantly sell out. 4
In this article: fitness, fitnessband, fitnesstracker, miband, security, smartband, wearable, xiaomi
All products recommended by Engadget are selected by our editorial team, independent of our parent company. Some of our stories include affiliate links. If you buy something through one of these links, we may earn an affiliate commission.