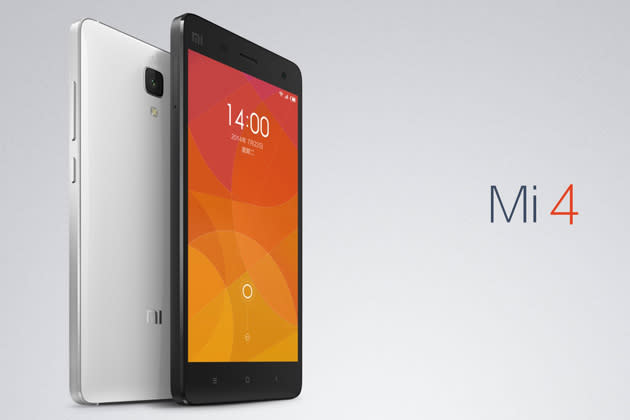 Having sold 26.11 million phones in the first half of this year, the beast from the East that is Xiaomi is back again with a new flagship Android phone: the Mi 4. For the first time ever, the company is adding a touch of metal -- the common SAE 304 stainless steel, to be exact -- to the phone's frame, which is sandwiched between a flat 5-inch 1080p screen and a swappable, slightly curved plastic back cover. The internal specs are as you'd expect: 2.5GHz quad-core Snapdragon 801 SoC, 3GB of RAM, 16GB/64GB of internal storage, 13MP f/1.8 main camera, 8MP selfie camera, LTE radio (at last), 802.11ac WiFi plus a 3,080mAh battery. As a bonus, you also get an infrared transmitter to play with the TV (which Xiaomi also sells). As usual, the Mi 4 will be very affordable: Just CN¥1,999 or about $320 for the 16GB version, and CN¥2,499 or about $400 for the 64GB version (both off-contract, of course).

Admittedly, from afar, the black Mi 4's front side and frame do remind us of the iPhone 5 or 5s, but you have to give credit to Xiaomi and its partners -- Foxconn and HiP -- for the extra work gone into crafting the metal parts. The shiny chamfer alone takes more than six hours to finish, apparently, and they've also added a nano-coating to the sides to deter fingerprints and liquids. The result is a 67.5mm-wide body -- beating the Smartisan T1's 67.74mm -- that sits comfortably in your hand, and the phone only weighs 149g.

The Mi 4 will be available for pre-ordering in China as early as July 29th, and you'll also be able to pick up one of the many back covers to suit your taste -- be it bamboo, wood, leather, cloth or even stone textures. On top of that, you can add CN¥99 or about $16 for an annual insurance for broken screen plus accidental liquid damage. Sadly, Xiaomi reps told me that there's no info regarding the phone's global availability just yet, so stay tuned. The boost in Xiaomi's sales figure is helped by the company's expansion into other parts of Asia, including Singapore, Malaysia, Philippines and, very recently, India. You can thank ex-Googler Hugo Barra for that, who has been very hands-on with this project. On a related note, there are now 65 million activated MIUI users, who will be able to upgrade to version 6 as of August 16th. After 26.11 million phones -- which translates to 33 billion yuan or about $5.32 billion -- so far this year, Xiaomi CEO Lei Jun expects to sell a grand total of 60 million phones in 2014, which would be more than twice of that from 2013. With that price point and Lei's promise to keep a tighter grip on the supply chain, this will no doubt be a walk in the park for Xiaomi.

Update: Xiaomi's also launched a $13 fitness band alongside the Mi 4. We have a feeling that it's going to sell very well.

In this article: android, china, lte, mi4, miui, mobilepostcross, phone, Snapdragon801, stainlesssteel, steel, video, xiaomi
All products recommended by Engadget are selected by our editorial team, independent of our parent company. Some of our stories include affiliate links. If you buy something through one of these links, we may earn an affiliate commission.