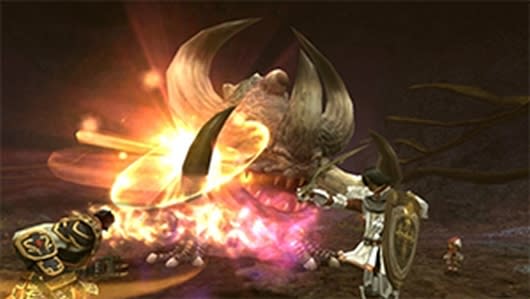 Alluvion Skirmishes are the next evolution of skirmish battles for Final Fantasy XI players, pitting adventurers against a changing layout and shifting foes. Why would you take it on? Well, for a chance at great items and shields, naturally. Did you really expect otherwise? And, you know, for content that accommodates a variety of different party sizes and roles, that's nice too.

Players can take on Alluvion Skirmishes solo or in groups containing up to six players; Alter Egos are usable to fill out a party's ranks. The NPC Oston will assemble a special statue called a eudamon for players who can then enter through the pre-existing Augural Conveyers, with Rala Waterways and Cirdas Caverns being the first pair to function with Alluvion Skirmishes. For more details on time limits and inscribing shields with Arcane Glyptics, take a look at the full preview on the official site.

In this article: alluvion-skirmishes, consoles, ff, ff11, ffxi, final-fantasy, final-fantasy-11, final-fantasy-xi, game-mechanics, news, news-items, patch, patches, preview, skirmishes, square, square-enix
All products recommended by Engadget are selected by our editorial team, independent of our parent company. Some of our stories include affiliate links. If you buy something through one of these links, we may earn an affiliate commission.