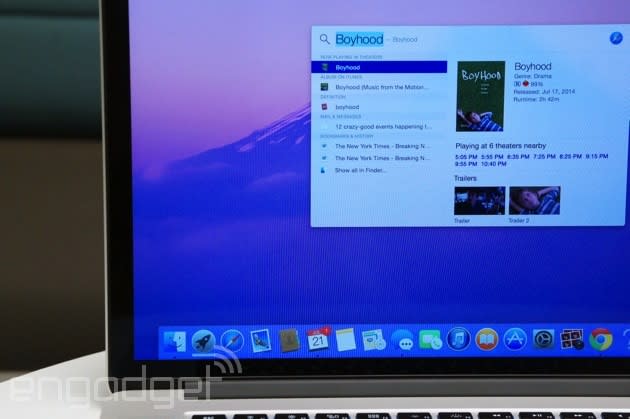 The Apple we know is run by a bunch of perfectionists. The company only shows off final devices at its launch events, and developers are strictly forbidden from sharing screenshots of upcoming iOS releases. This is a company that doesn't usually bother with sneak peeks. Or do they? Apple announced a few months ago that it would carry out a public beta-testing program for OS X Yosemite, its next-gen Mac operating system, allowing regular people to give feedback before it eventually gets a wide release. Now, the testing period is finally about to begin: Apple says that beta users will be able to download an early version of the OS starting tomorrow at around 1PM Eastern. If you've already signed up to join the beta program, you don't need to do anything; you'll get a notification tomorrow when the OS is ready to download. If you haven't gotten around to it yet, though, we suggest you get on that ASAP: Only one million people are allowed to participate in this early-stage testing, which means slowpokes might not get a chance.

Update: Our preview of OS X Yosemite is already up, even before the public beta period begins. Read it here!

In this article: apple, beta, betaseedprogram, mac, os x, os x yosemite, osx, osxyosemite, yosemite
All products recommended by Engadget are selected by our editorial team, independent of our parent company. Some of our stories include affiliate links. If you buy something through one of these links, we may earn an affiliate commission.