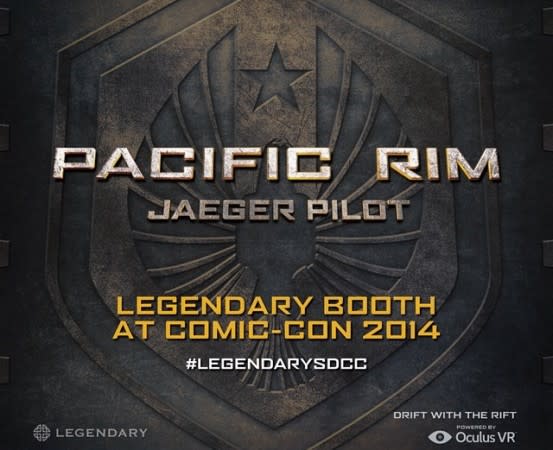 We're not sure how many of the new Oculus Rift VR kits have shipped out to developers already, but it looks like a healthy amount are in San Diego right now. That's where Comic-Con is happening this week and, following the X-Men VR demo we already heard about, Legendary Pictures and Oculus have teamed up for Pacific Rim: Jaeger Pilot. It lets attendees take control of the 250-foot tall Jaeger "Gipsy Danger" (no drift connection necessary) and do battle in a virtual reality combat simulator against the kaiju Knifehead (the first one you see in the movie). The whole experience is built in Unreal Engine 4 using the same assets Industrial Light & Magic worked with for the movie. Sure, you've seen the movie, and maybe even in IMAX 3D, but we're pretty sure even Guillermo del Toro's directing tricks can't add up to feeling like you're there, fighting an 8,700 ton monster off the coast of Alaska. It's all in Legendary's booth #3920 for all four days the show is open, from Thursday through Sunday. Don't have a ticket? There's a video preview embedded after the break, but it can't compare to diving into a VR world with Oculus -- maybe we'll be able to enjoy it at home by April 2017 when Pacific Rim 2 arrives.

In this article: comic-con, comic-con-2014, GuillermoDelToro, hdpostcross, jaeger, oculus, OculusRift, oculusvr, pacificrim, pacificrim:jaegerpilot, sdcc2014, video, virtualreality, vr
All products recommended by Engadget are selected by our editorial team, independent of our parent company. Some of our stories include affiliate links. If you buy something through one of these links, we may earn an affiliate commission.