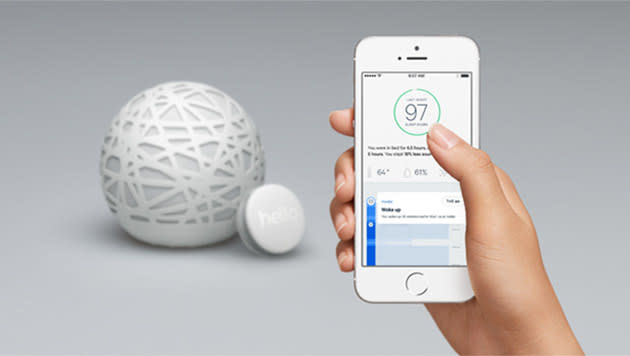 You're lucky if you can sleep easily and wake up feeling refreshed all the time -- some people need a bit help to get a good night's rest from apps and gizmos, like this new device called Sense. The gadget, which looks like a crystal ball with rubber bands, acts as some sort of a bedside sleep guardian that monitors not only your sleeping habits, but also environmental conditions. It comes with a "Sleep Pill" that clips to your pillow, which tracks your tosses and turns, automatically transmitting data to Sense via Bluetooth Low Energy and ANT. The gadget then relays all the info you need, including a sleep number to let you know how well (or how bad) you've slept, through the system's iPhone or Android app.

Sense has other things to offer other than this core feature, such as the ability to record sudden loud sounds that might disrupt your sleep through its built-in microphone. (If you're wondering, creator James Proud told The Verge that it's not always recording, and it only ever saves sudden sound spikes.) The device can also detect pollen or dust in the air that might trigger allergies or determine whether you need heavier drapes to block out the light. Even better, the device can wake you up at the end of an REM cycle, so you don't feel sluggish when you get out of bed.

Sense's developers, Hello Inc., launched a KickStarter campaign recently to raise $100,000, which the project has now surpassed, as it's already received $420,000 in pledges, thus far. A SEC filing spotted by StrictlyVC, however, proves that the company already has serious VC backing to the tune of $10.5 million, indicating that its KickStarter campaign is but a PR move. You can use the campaign to your advantage, though, since you can get the device and a Sleep Pill by pledging $99, whereas pre-ordering the system later on will cost you $129. By the way, in case Sense still ends up falling short of your expectations, you can always pair it up with a smart bed when one does hit the market.

In this article: app, hellosense, mobilepostcross, sense, sensor, sleep
All products recommended by Engadget are selected by our editorial team, independent of our parent company. Some of our stories include affiliate links. If you buy something through one of these links, we may earn an affiliate commission.