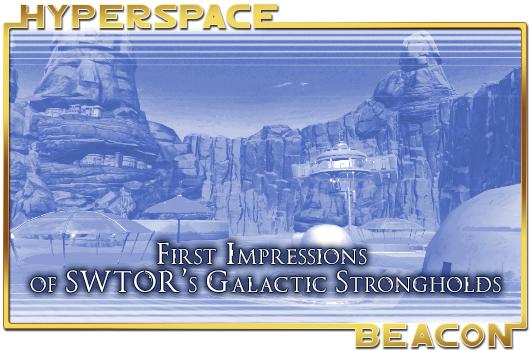 It's been an exciting weekend: I've spent many hours just absorbing the contents of the new expansion for Star Wars: The Old Republic. Of course, the largest part of Update 2.9 is Galactic Strongholds. I'll come right out to say that the SWTOR livestreams do not do it justice. I'm finally glad that I could get my hands on it to see exactly what the hook system feels like, where I can find all the furniture, and mostly importantly, how much it is going to cost.

Beyond the strongholds themselves, BioWare also introduced a new planet and flashpoint this weekend. I took some time to also visit Manaan, and I know I'm going to sound like a fanboy when I say that it blew me away. I was absolutely not expecting something that gorgeous for a simple flashpoint.

We have a lot to talk about, and if you've spent some time on the SWTOR PTS, I'd like to read your opinions in the comments. But first here are a few of my thoughts.

Let's start out with the part the surprised me the most: Manaan, a water-world was introduced in Knights of the Old Republic. This planet, known for its mining of kolto, contained a starmap that Revan needed to find the Star Forge. Although it was likely just a blip on Revan's radar, I remember it for its pristine buildings, which were so white they seemed to glow. It kind of reminded me of Cloud City before all the windows were dropped in the Star Wars Special Edition or the interior of stations and starships in Stanley Kubrick's 2001. When I livestreamed it this weekend, I could almost hear the gasp from the chatroom when I first stepped off the shuttle onto the platform.

The most important thing was how much it called back to Ahto City from KOTOR. It wasn't just a copy from that game; it took the best parts from those dated graphics and made them fully realized in a more modern gaming engine.

Bear in mind that the Manaan flashpoint is a tactical flashpoint, which means that it's designed to work with a suboptimal group. In theory, you can run a tactical flashpoint with the first three players who queued up. There are items like kolto stations in boss fights, so even if a group happens to lack a healer, it could survive the encounter.

My group just happened to be a tank, healer, and two DPS; the healer and I were well over-geared. This made the majority of the fights super easy. Often the tank didn't even have to worry about holding aggro the whole time.

I don't want to give away too many mechanical spoilers, but I will say that unlike some of the other flashpoints where the mechanics are straightforward or a slight variation on tank-and-spank, this one offered a good mix of puzzle-type mechanics. To defeat the bosses optimally, we had to study what was happening. Unfortunately, one of the boss mechanics was muddied because we could just out DPS the mechanic.

In the fight, there are three champion mobs: the boss and two assistants. These assistants have a mechanic that can disable the boss, making him more vulnerable to damage. It's a great mechanic that we could completely ignore because his defenses either weren't removable via this mechanic or weren't high enough in the first place.

I did enjoy all the encounters in the instance, so bear that in mind when I say that I wish more time had been spent on more difficult flashpoints. I would like difficult flashpoints to be a part of the standard content. I certainly want everyone to be able to experience the story, so don't eliminate the tactical encounters, but when a tactical is released, I wish BioWare would release an instance that requires a trinity at the same time rather than release it later as something that becomes a gear grind.

The strongholds are a huge money sink. If you thought they were going to be anything but that, then you're in for a rude surprise when they hit the live servers. That said, you can easily gain a Coruscant or Dromund Kaas apartment for what amounts to pennies, whereas the Nar Shaddaa Skypalace and Tatooine Homestead could break you.

The apartments (Coruscant and Dromund Kaas) are essentially the same. The maps for the buildings are exactly the same. The only real differences are the textures on the walls and floors. Each costs only 5,000 to start, and then most of the rooms cost between 25,000 and 40,000. Of course, the garage (250,000) and balcony (1 million) cost more, but they are bigger, more luxurious rooms. From my perspective, the apartments are meant to grow with your character as you level up. (Admittedly, the first time I leveled, I didn't have 1.44 million, but that was two years ago. As I understand it, gaining money at a lower level is a bit easier now.)

The luxury strongholds will break you if you are not actively trying to make money in the game. If you don't do dailies or sell items on the Galactic Trade Network, you will not be able to afford a Nar Shaddaa or Tatooine stronghold.

The Skypalace is practically the definition of nickel-and-diming. The primary unlock costs 250,000. This gains you the entry, main hall, east room, and west room. But that space feels really confined. The northeast and northwest rooms start costing money 450,000 each, with each room after that costing more and more. The last rooms, the garage, balcony, and main room, costs 2.25 million each. All told, if you want to unlock the whole palace (and you almost need to make the building feel right), it will cost 10.5 million (6.5 million if you have the free unlocks).

If you're looking for luxury and value, the Tatooine Homestead seems to be the better bet, though you wouldn't guess it by its 2.5 million upfront cost. The 2.5 million gets you practically the whole stronghold. There are minor rooms that cost 900,000 each, but unlike the Skypalace, the Homestead doesn't need those for the stronghold to feel complete. The only extra room that is a must-have would be the hanger, which is amazing and costs 1.8 million.

All told, the Tatooine Homestead is 7 million; the necessary rooms run only 4.3 million. Compare that to the 10.5 or even the 6.5 of the Nar Shaddaa Skypalace. Even though I have the unlocks for the Skypalace, I think I'm going to buy the Homestead in stead (no pun intended).

Next time, let's talk about the guild versions of these strongholds and the much-anticipated guild capital ship, but in the meantime, what do you think of these strongholds? What about the Manaan flashpoint? Have you tried that out yet? Let me know your thoughts in the comments. And as always, may the Force be with you.

In this article: bioware, ea, electronic-arts, featured, First-Impressions, galactic-strongholds, hyperspace-beacon, lucasarts, manaan, opinion, player-house, player-housing, sci-fi, star-wars, star-wars-the-old-republic, swtor, the-old-republic, tor, update-2.9
All products recommended by Engadget are selected by our editorial team, independent of our parent company. Some of our stories include affiliate links. If you buy something through one of these links, we may earn an affiliate commission.