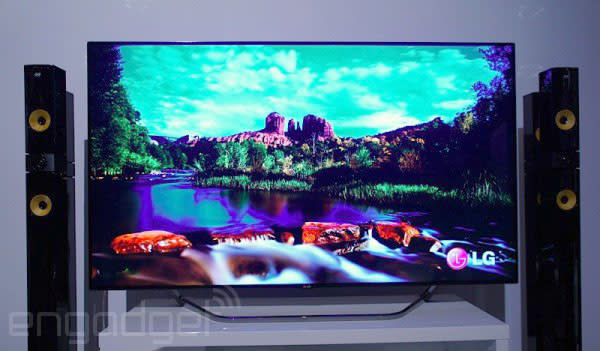 If you're set on an OLED Ultra HDTV instead of LCD, you can now put a price and date on your idealism: LG's 65-inch 65EC9700 4K model will reportedly ship in September with a sticker price of $8,999. Apart from those deep OLED blacks, the model also features passive 3D, Miracast/MHL and nearly invisible bezels. The first 4K OLED models, including that one, arrived earlier this year at CES, but so far none have hit stores. We also haven't seen any pricing, other than for a few exotic models like LG's $30,000 curved 77-inch UHDTV. Though the 65-inch model is far more reasonable, according to HD Guru, the lowest possible price (UPP) set by LG is $6,999 -- still more than double LG's 4K LCD model.

In this article: 4K, 4K OLED, 65EC9700, availability, hdpostcross, lg, OLED, pricing, UltraHD
All products recommended by Engadget are selected by our editorial team, independent of our parent company. Some of our stories include affiliate links. If you buy something through one of these links, we may earn an affiliate commission.