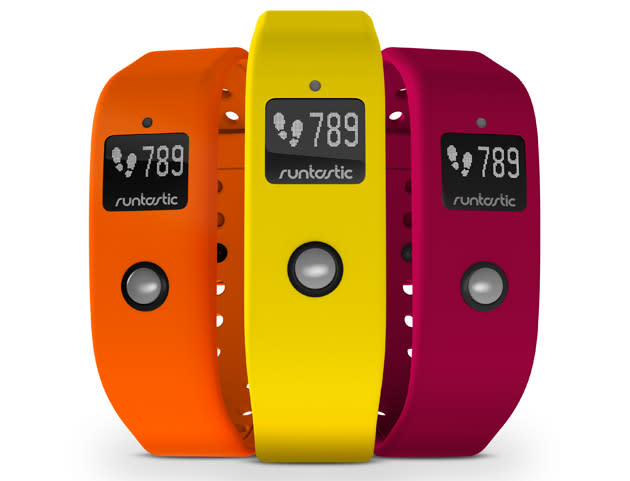 If you've heard of Runtastic, it probably means you're something of a jock: The company got its start building running apps for tracking your distance, pace, et cetera. For the past two years, though, it's been making all sorts of gear to go with it, including a GPS watch, armband, heart-rate monitor, speed sensor, bike mount and even a WiFi scale. Now the company's rounding out its collection with something super obvious: a fitness tracker. The Orbit, as it's called, does all the things you'd expect a fitness band to do: track your steps, calorie burn, sleep patterns. It's waterproof up to 300 feet, meaning you can use this for swimming, in addition to jogging. It vibrates to wake you up in the morning, and when you've been inactive for too long. And, like competing devices, it uses Bluetooth Smart to wirelessly sync your data with either an Android or iOS app. Thanks to that low-power radio inside, battery life is rated for seven days. So far, so familiar. What makes the Orbit slightly different, though, is that in addition to being a fairly generic fitness tracker, it doubles as a basic running watch. Once you sync the device to the Runtastic app, you can use the small screen on the band to view key stats like your distance, current pace and so on. And though the display is so small that it only shows one line of text at a time, you can press a button on the device to cycle through different metrics. It's a neat feature for folks who would normally run with their smartphone, and who already use an app to track their distance. (In this case, of course, you'd have to use Runtastic, specifically.) Of course, if you already own a dedicated sports watch, this feature will be of little use.

Other than that, the most distinguishing thing about the Orbit might actually be the application itself. Which makes sense: This is the company's specialty. In addition to compiling all your data into pretty graphs, the standalone Runtastic Me app can make recommendations based on your goals, and based on what's worked for other people. So, if your goal were to have 18 percent body fat, Runtastic could tap into the habits of other people who are already that lean. In addition, the Orbit has an ambient light sensor, which means if the company wanted to, it could later add things like sunscreen reminders, depending on how much time you've sent in the sun. Finally, the app lets you log your mood, but more than anything, this just seems like a gimmick.

The Orbit is up for pre-order for $120, with the free Runtastic Me app available on iTunes and Google Play. As it happens, that's slightly expensive for a fitness tracker (the Fitbit Flex, for instance, costs $100), but there's also more in the box: two one-size-fits all band in two different colors, plus a detachable clip you can use to fasten the device to your clothes. There are also six additional colors you can buy separately, in case the standard black and blue bands aren't doing it for you. Hopefully we'll test one ourselves at some point, but in the meantime we've added device photos and screenshots so that you have a better idea of what you're getting here.

In this article: fitness tracker, FitnessTracker, orbit, runtastic, runtastic orbit, runtasticorbit
All products recommended by Engadget are selected by our editorial team, independent of our parent company. Some of our stories include affiliate links. If you buy something through one of these links, we may earn an affiliate commission.