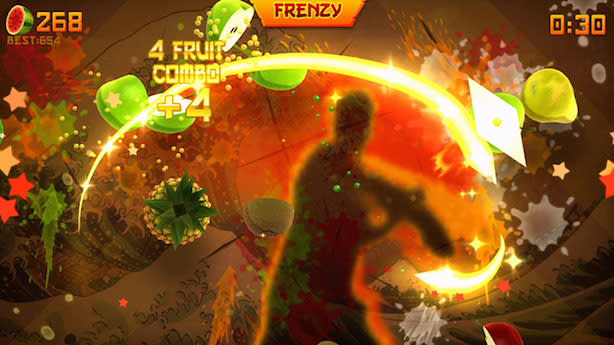 The ESRB has issued a content rating for the unannounced Fruit Ninja Kinect 2, suggesting that a sequel to Halfbrick's fruit-eviscerating action game will soon find its way to the Xbox One.

The Australian Classification Board outed the follow-up in a rating issued last month. Neither developer Halfbrick nor publisher Microsoft has issued a statement confirming the game's existence or upcoming release.

Prior to its Xbox 360 Kinect debut in 2011, Fruit Ninja was a hit on mobile platforms, topping the App Store sales charts and spawning the animated film-based spinoff Fruit Ninja: Puss in Boots. Teetotalers beware: the ESRB warns that Fruit Ninja Kinect 2 features oblique references to alcohol in on-screen text descriptions like "In Eastern Africa you can buy banana beer." Scandalous!

[Image: Halfbrick]
In this article: esrb, fruit-ninja, fruit-ninja-kinect, fruit-ninja-kinect-2, halfbrick, microsoft, xbox-one
All products recommended by Engadget are selected by our editorial team, independent of our parent company. Some of our stories include affiliate links. If you buy something through one of these links, we may earn an affiliate commission.