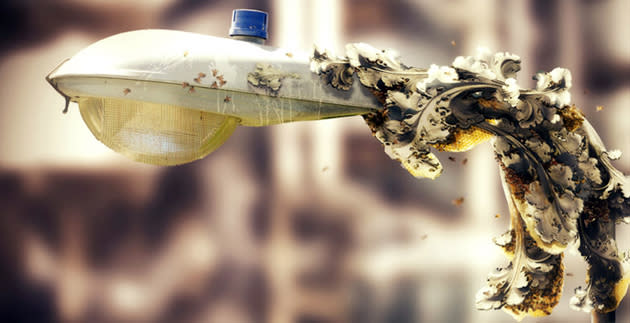 Trees are the most efficient oxygen-producing mechanisms known to man, so researchers have been trying to replicate them in order to produce breathable air in outer space. Julian Melchiorri, a student at the Royal College of Art, has created an artificial leaf that can produce endless oxygen using nothing more than light and water. The manmade leaves could be a game changer for space exploration, and they could also be used as biological air filters or oxygen producers back here on Earth. Trees do more than create oxygen; many of them also bear fruit. Artist Sam Van Aken has produced an amazing hybridized fruit tree that grows more than 40 different kinds of fruit, including peaches, apricots and almonds.

Bees already do a lot of work for humans by pollinating crops and producing honey, but could they build our cities too? A pair of designers suggests that bees' honey-making glands could be used to produce concrete instead, enabling them to 3D print structures. Even if that plan doesn't work out, there's still plenty to be learned from bees. Take honeycomb, for example: A team from the Stanford School of Engineering has made a breakthrough honeycomb lithium-ion battery design that could lead to more stable batteries for electric vehicles. And speaking of electric vehicles, this week Tesla and Panasonic signed a multimillion dollar deal for the world's first battery-producing Gigafactory.

What if you could build an entire house for just $3,500? Architect Nicoló Bini, has developed a novel technique for doing just that -- and it involves covering an inflatable balloon with concrete! In other green design news, Turkish architecture firm Autoban recently designed a set of futuristic wooden cocoons for Azerbaijan's Baku Airport, lending the space a cozy, natural atmosphere. Cozier still, the Hanging Tent Company just unveiled a portable tent that hangs high in the treetops. The spherical tent features circular windows and a wood floor. And a 13-year-old from Georgia successfully built her own tiny house. The mini mansion features a kitchen, a lofted bed and a bathroom with a composting toilet. Looking ahead, Vo Trong Nghia has been selected to design the Vietnam Pavilion at the World Expo 2015 in Milan. The pavilion will be modeled after Vietnam's national flower, the lotus. And filmmaker George Lucas has hired Studio Gang and MAD Architects to design a museum of narrative art in Chicago.

In other green tech and innovation news, Amazon has launched an online store for 3D-printed objects. So far, the store offers 250 products, including pendants, toys, nylon wallets, cookie cutters and bobbleheads. A team from Australia obliterated a 26-year-old record for the world's fastest long-range electric vehicle last week, traveling over 310 miles at an average speed of 62MPH. (The previous record was 45MPH.) Students from Goldsmiths, University of London created a pair of sneakers that are made entirely from plastic trash found on the beach. The Montreal-based media and entertainment studio Moment Studio has created a luminous forest wonderland in Quebec. A team from MIT has developed a simple graphite sponge that soaks up water and converts it to steam using solar energy. And digital tattoos could soon become a reality: The Silicon Valley firm VivaLnk has partnered with Motorola to offer up temporary tattoos that enable you to unlock your phone with a simple tap. And in case you still need a reason to say goodbye to your incandescent light bulbs, this infographic makes a bulletproof case.

In this article: EcoFriendly, green, inhabitat, science, transportation
All products recommended by Engadget are selected by our editorial team, independent of our parent company. Some of our stories include affiliate links. If you buy something through one of these links, we may earn an affiliate commission.