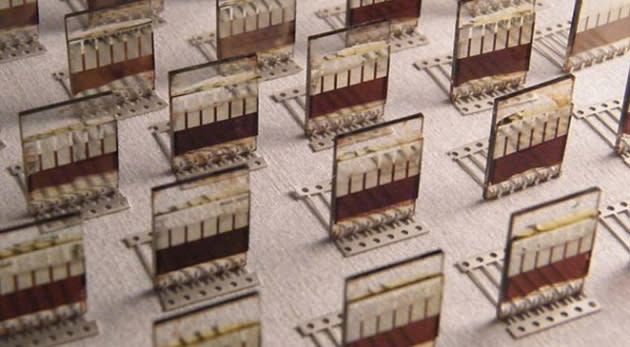 Scientists have dreamed of painting solar cells to generate energy on just about any surface, but efficiency has been a problem; researchers were happy to get one percent just a couple of years ago. At last, though, it looks like viable paint-on power is close at hand. A team at the University of Sheffield has developed spray-on cells that should be both cheap and capable. The trick is to coat an object in perovskite, a calcium titanium oxide mineral -- it's inexpensive like organic solar cells, but absorbs light nearly as well as silicon.

In the lab, the technology isn't quite ready for prime time. A spray-based cell gets about 11 percent efficiency versus 19 percent at perovskite's ideal performance. However, it's still early days. Scientists believe that their approach could scale up to the same manufacturing techniques used for spray painting vehicles. If that happens, it's conceivable that your future car (and virtually any other device) could harvest the sun's rays without the steep costs and awkward product designs that are frequently involved when you use old-fashioned solar panels.

In this article: energy, perovskite, power, science, solar, solarenergy, solarpower, spray, spray-on, spraypaint, universityofsheffield
All products recommended by Engadget are selected by our editorial team, independent of our parent company. Some of our stories include affiliate links. If you buy something through one of these links, we may earn an affiliate commission.