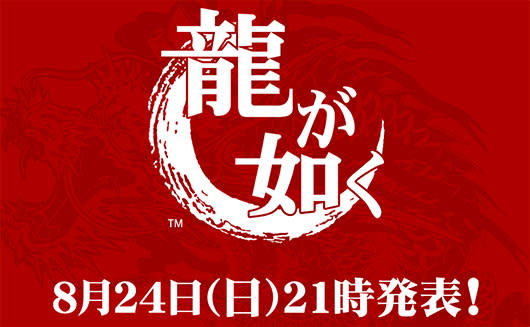 Sega plans to announce something on August 24, and while it appears to be related to the long-running Yakuza series, it's unknown exactly what the publisher has in store.

Pay a visit to the Ryu Ga Gotoku website - that's the Japanese title of the Yakuza franchise - and you'll find the message seen above. Those who don't speak Japanese aren't missing much as the message roughly translates to the title of the series, and the words "9 p.m., August 24." That text also links to a Nico Video page which will presumably play host to whatever sort of announcement Sega is plotting.

Whether Sega is planning to unveil a new Yakuza entry or not, fans outside of Japan shouldn't get their hopes too high that the series might leave its native country. Though a handful of Yakuza games have received localization over the years, the series' two most recent entries, Yakuza 5 and Yakuza Ishin, remain in Japan with no known plans for release elsewhere in the world.
[Image: Sega]
In this article: japan, ryu-ga-gotoku, sega, yakuza, yakuza-5, yakuza-ishin
All products recommended by Engadget are selected by our editorial team, independent of our parent company. Some of our stories include affiliate links. If you buy something through one of these links, we may earn an affiliate commission.