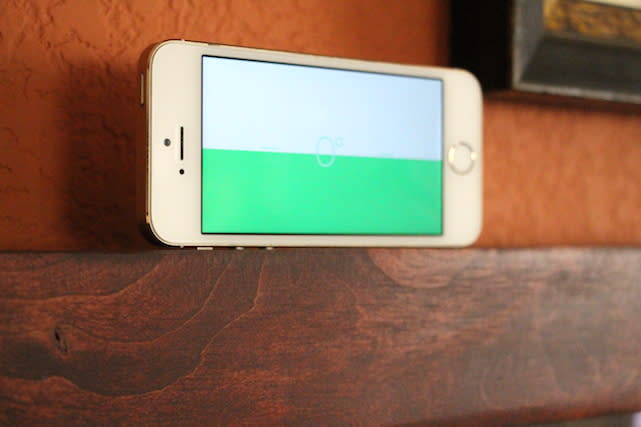 Most people don't even seem to know that an iPhone with iOS 7 comes with a built-in Compass app. Although that app could use some help in terms of accuracy, it also has a feature that works pretty well -- a bubble level.

Just launch the Compass app (or tell Siri to "Launch Compass" if you don't remember where you hid it), calibrate it by rolling the little red ball around by tilting the iPhone in all sorts of directions, then look down at the bottom of the display underneath where your latitude and longitude are.

Two little white dots indicate that there's another screen that you're not seeing in the Compass app. Swipe the compass to the left, and the level appears! If your iPhone is in a flat orientation, it acts as a 3D bubble level -- perfect for determining if a table or other surface is precisely level. Hold the iPhone up in either a portrait or landscape orientation, and it's a 2D bubble level. Just put the iPhone on top of a picture frame, and you can quickly adjust a photo or painting until your obsessive-compulsive need to have it exactly straight is fulfilled.

When the level is perfectly flat or exactly level, it will turn green -- a quick visual validation that you've tweaked the painting just enough to get it straight. If it's even just the slightest amount off, the level will be black and will display the exact angle at which the picture is skewed.

What's the strangest thing you've ever done with the level in the iOS Compass app? Let us know in the comments.

In this article: compass app, how-to, howto, iOS, iOS 7
All products recommended by Engadget are selected by our editorial team, independent of our parent company. Some of our stories include affiliate links. If you buy something through one of these links, we may earn an affiliate commission.