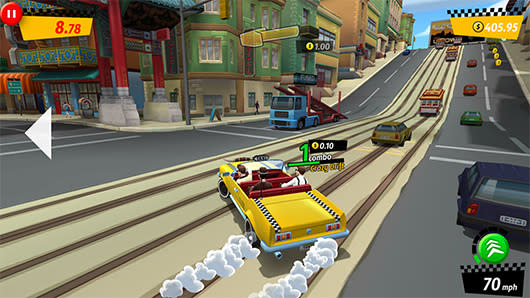 Hot on the heels of its iOS counterpart, the mobile-exclusive Crazy Taxi: City Rush is now available on Android devices.

Designed by Crazy Taxi creator Kenji Kanno, City Rush has been built specifically for the touchscreen interface found on mobile devices. Though the game still centers on racing through a city, gathering pedestrians and delivering them safely to their destinations, Crazy Taxi: City Rush also includes new characters, new cabs (including a tank) and new jobs spread throughout the sunny streets of Bay City.

Crazy Taxi: City Rush can now be found on Google Play. It's a free download, but the game does feature numerous in-app purchase options.


LONDON - August 7th, 2014 - SEGA Networks, Inc. today announced the launch of Crazy Taxi™ City Rush for Android, the latest installment in the Crazy Taxi franchise designed for mobile devices. Crazy Taxi: City Rush is now available as a free download via Google Play. The new game was designed by Kenji Kanno, creator of the original Crazy Taxi arcade phenomenon, and developed by Hardlight™ Studio, one of SEGA's top in-house studios and developer of the global hits Sonic Dash™ and Sonic Jump Fever™. Crazy Taxi: City Rush preserves the spirit of the iconic arcade hit with all new adrenaline-fuelled missions and a sprawling concrete jungle to unlock, explore, and master, featuring intuitive controls and gameplay optimised for smartphones and tablets.

Drive Crazy on Mobile: Speed down alleys, drift around corners, weave through traffic, fly up ramps and launch into the air with intuitive driving controls, playable in both portrait and landscape modes.
Master the Streets of Bay City: Hone your driving skills in an all-new, bustling and expanding 3D city. Drive crazy downtown, uptown, on the beach, and through the 'burbs. Deliver a colorful cast of new and classic characters to their destination before the timer runs out. Learn the streets and defy satellite navigation! Take sneaky shortcuts to beat the clock and max out your score. Stay tuned; even more areas will be added soon.
Variety of missions: Earn medals from increasingly challenging jobs – and while you're at it, why not crush some cars by taking a tank for a spin?
Customize Your Cab: Upgrade and fully customize a fun collection of modern and classic cabs. Increase your taxi's power and (and curb appeal) with over-the-top upgrades and accessories like dinosaurs and bullhorns!
Hire Your Friends and Build a Fleet of Taxis: Manage your own cab company by hiring friends to drive for you in the Taxi Tycoon multiplayer game.
Play Without Limits: No more gas in your tank? Borrow your Facebook friend's car to complete a mission, and you'll automatically share the fare! Players will be pleased to note that an internet connection is not required to enjoy the game.
Rock Great Tunes: Music has been hand-selected to complement the gameplay. Blast great tunes as you complete missions all over Bay City.

Crazy Taxi: City Rush is now available for free on Android devices from Google Play and on iOS from the App Store. For more information on Crazy Taxi: City Rush, please visit the official Facebook and Twitter pages.
In this article: android, crazy-taxi, google, google-play, kenji-kanno, mobile, sega
All products recommended by Engadget are selected by our editorial team, independent of our parent company. Some of our stories include affiliate links. If you buy something through one of these links, we may earn an affiliate commission.