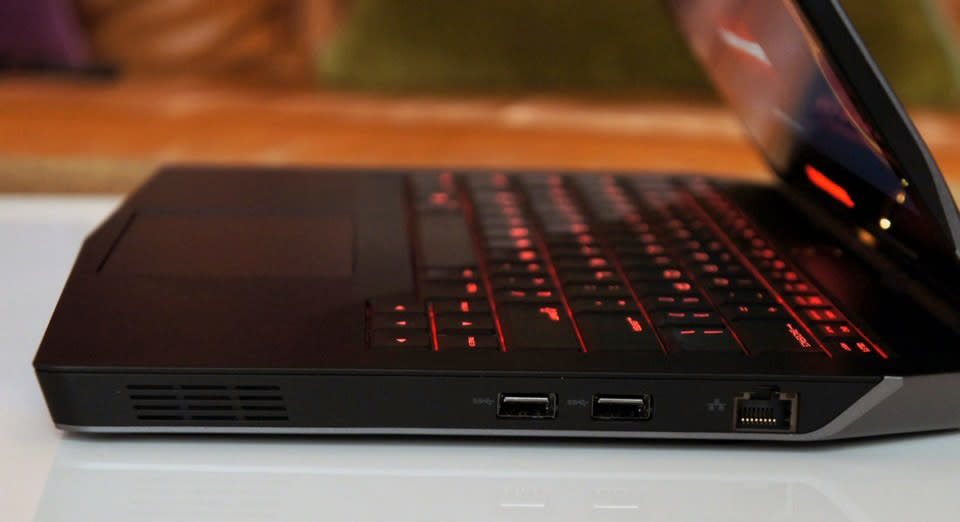 Y'all remember the Alienware M11x, right? That compact, netbook-sized gaming laptop with the glowing keyboard that made it look like a spaceship? Anyway, Dell discontinued it back in 2012, only to release several big-screen machines the following year. Well, it looks like someone at the company saw the error of their ways: Dell just announced the Alienware 13, and while it's not the brand's smallest notebook ever, it's definitely the smallest the company has put out in quite some time. The machine won't arrive until November, unfortunately, but for now, here's what we know: This little guy will weigh in at 4.5 pounds -- about two pounds lighter than the Alienware 14. It will also measure less than an inch thick, making it an obvious competitor to the super-thin Razer Blade. Similar to the Blade, which rocks a 3,200 x 1,800 touchscreen, the Alienware 13 will be offered with a 2,560 x 1,440 touch panel. Keep it mind, though, that it will actually come standard with 1,366 x 768 resolution. There will also be an in-between 1080p option, according to Dell. Neither of those will support touch, however -- just something to consider as you're going through all the configuration options online.

On the inside, it makes use of NVIDIA's GeForce GTX 860M GPU, and can be configured with either an SSD or a traditional hard drive. It will eventually rock Intel's next-gen Broadwell CPUs too, just not at launch. Keep it mind that Dell won't be down-clocking the processor or GPU, so while the Alienware 13 might have a smaller footprint, you probably shouldn't expect it to run any cooler. The battery, meanwhile, is rated for up to eight hours of video playback, though surely the runtime will drop once you're playing games unplugged. No word on price yet, or even full spec options. Dell says it'll reveal all that sometime... later, closer to when the machine goes on sale. Until then, enjoy the hands-on photos.

Update: An earlier version of this article reported that Dell will be using full-voltage processors in the Alienware 13. It will actually be using ultra-low-voltage CPUs instead. 5
In this article: alienware, alienware 13, alienware13, dell, gaming laptop, gaming laptops, gaming notebook, GamingLaptop, gaminglaptops, hands-on
All products recommended by Engadget are selected by our editorial team, independent of our parent company. Some of our stories include affiliate links. If you buy something through one of these links, we may earn an affiliate commission.