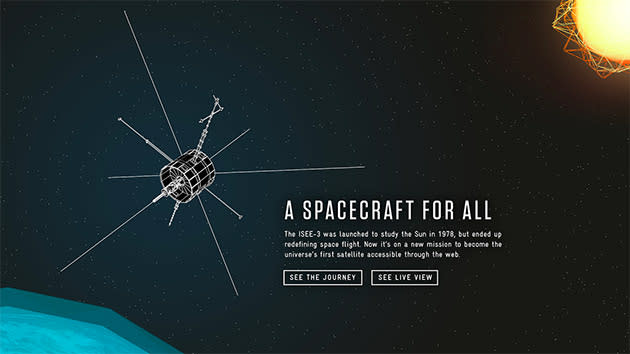 A few months ago, the ISEE-3 Reboot Project managed to raise $160,000 to bring the spacecraft back to Earth after 36 years roaming outer space. The team behind the campaign successfully took control of the spacecraft and reactivated some of its scientific instruments, but they found it impossible to reignite its thrusters, so it's sadly never going to make its way back home. That doesn't mean you'll never be able to see the ISEE-3 for yourself, though -- on August 10th, Google will be hosting a Hangout session to livestream the spacecraft's lunar flyby as it passes the dark side of the moon. The tech giant will broadcast from McMoon's, an abandoned McDonald's near the NASA Ames Research Center, and you can tune in through a website built for this occasion called A Spacecraft for All.

If you visit the website now, though, you'll also be able to relive ISEE-3's journey from the time it launched in 1978 through graphics made using Chrome's WebGL technology (thus, it's optimized for the browser -- we weren't even able to load it on Firefox). This website also provides access to the data gathered by the remaining onboard instruments, as well as to the spacecraft's current position and trajectory. ISEE-3, which stands for International Sun/Earth Explorer 3, was originally sent to space to measure particles, waves and plasmas. It was eventually repurposed to study the interaction between solar winds and comets until it was decommissioned. While it won't make it back to Earth, the four instruments that the Reboot Project managed to revive will be sending data through ground radio dishes for a whole year. After that, the ISEE-3 will continue its journey around the solar system and won't be this close to our planet again until 2029.

In this article: google, isee-3, science, space, spacecraft
All products recommended by Engadget are selected by our editorial team, independent of our parent company. Some of our stories include affiliate links. If you buy something through one of these links, we may earn an affiliate commission.