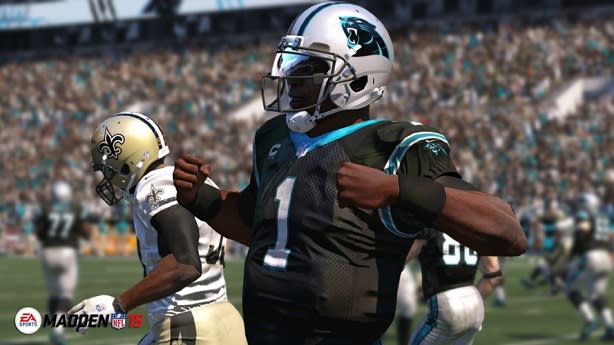 There won't be a freely available demo of Madden NFL 15 for players to download this year, an EA rep has confirmed to Joystiq. The publisher made a habit of offering a downloadable demo for its annual pro football series since December 2005, when it launched the demo for Madden NFL 2006. A demo for the game will reportedly be available only to Xbox One owners that also subscribe to EA Access, according to an EA representative that spoke with Polygon.

The publisher revealed EA Access in late July as an Xbox One subscription service offering full access to its games for $5 per month (or $30 per year). EA Access members also have the opportunity to play major EA releases on a limited basis up to five days before the game's launch. Madden 15 will launch August 26 for Xbox One, PS4, Xbox 360 and PS3 and will include strategy tutorials in its Skills Trainer mode, an "overhaul" to its defensive mechanics as well as the addition of player confidence in its franchise mode.
[Image: EA Sports]
In this article: Demo, EA, ea-access, EA-Sports, ea-tiburon, Electronic-Arts, football, Madden, madden-15, madden-nfl-15, microsoft, NFL, playstation, ps3, ps4, xbox, xbox-one
All products recommended by Engadget are selected by our editorial team, independent of our parent company. Some of our stories include affiliate links. If you buy something through one of these links, we may earn an affiliate commission.