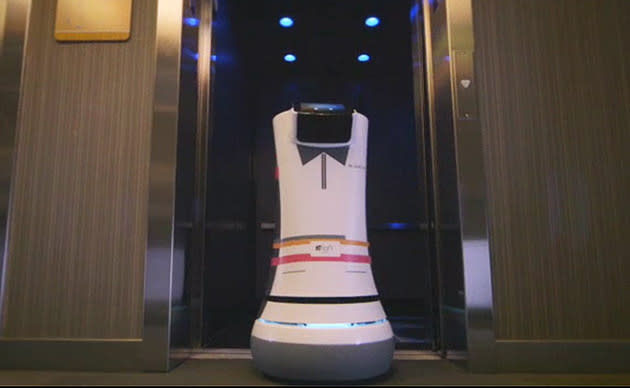 If you plan to stay in Cupertino's high-tech Aloft Hotel in the near future, don't be surprised if you open your door to a 3-foot-tall robot carrying extra towels or breakfast. See, it's the Starwood property's new butler (officially called A.L.O. Botlr, which is short for "robot butler," of course) programmed to assist the hotel's concierge in catering to your requests. The 100-pound machine comes loaded with a 7-inch tablet screen to interact with guests and staff, as well as 4G and WiFi connections so it can call elevators when it needs a ride. Let's say you pinged front desk to ask for new toiletries -- the staff then just loads the items (as long as they don't exceed 10 pounds) in an empty compartment on top of the robot and inputs your floor and room number on the tablet interface. You'll know Botlr's lurking outside the door when it calls up the room's phone, and instead of a crisp $20 bill, all it asks in return is a tweet with the #meetbotlr hashtag.

The A.L.O. Botlr is actually a repainted, bow-tie-wearing version of a robot called SaviOne developed by California startup Savioke. It's a new company, but it's backed by Google Ventures and led by Steve Cousins, the former CEO of Willow Garage, which you might recognize as the developer of the PR2 experimental robot. In fact, the PR2 looks similar to Botlr, but the latter (like Softbank's Pepper) was designed to look a lot more approachable so as not to scare hotel guests. Also, the newer machine lacks the PR2's limbs, which means: 1.) it's incapable of doing tasks that requires the use of hands, and 2.) its a lot cheaper to make, seeing as those limbs are the PR2's most expensive components.

Botlr will make its Aloft Hotel debut on August 20th for a pilot program: if successful, all 100+ Aloft Hotels could have one to two at their disposal. Aloft brand's senior vice president Brian McGuinness swears, however, that these robots won't be replacing human employees and will even free them up for other, more important tasks. Sadly, you won't be seeing Botlr rolling along other hotel chains' hallways anytime soon. Starwood has an exclusive deal with Savioke until the end of 2014, though the startup plans to open the pilot to other hotels next year.

In this article: alobotlr, AloftHotel, robotics, savioke, savione, StarwoodHotels, WillowGarage
All products recommended by Engadget are selected by our editorial team, independent of our parent company. Some of our stories include affiliate links. If you buy something through one of these links, we may earn an affiliate commission.