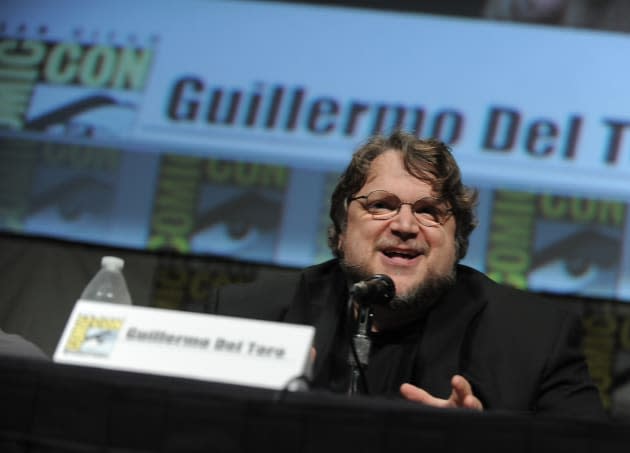 With the sad state that the Resident Evil and Dead Space franchises are in, word of a new high-profile horror game is incredibly tantalizing. Downright exciting, even. Earlier today at Sony's Gamescom media briefing, the next Silent Hill was teased in a rather convoluted way on stage -- of course, when Hideo Kojima is involved, convolution is to be expected. A title called P.T. was was briefly shown after a video for Metal Gear Solid V: The Phantom Pain's in-game box (seriously), and the audience was told that an interactive trailer for the former would be available on the PlayStation Store relatively soon. NeoGAF spotted that a gamer on Twitch started broadcasting her gameplay after downloading, and that's when something peculiar happened. Toward the end of her terrifying stream, she unlocked a cutscene with a mysterious town and title cards bearing the names of the Metal Gear head honcho, filmmaker Guillermo Del Toro (Pacific Rim, Pan's Labyrinth, Hellboy) and the name "Silent Hills."

Another aspect of the reveal is that the game's protagonist is apparently played by none other than Norman Reedus -- everyone's favorite Dixon on The Walking Dead, Daryl. If it were just him involved and not Kojima or Del Toro we might be a bit worried -- Reedus' last starring role in a game was the horrible Activision TWD tie-in.

What's more, this could be Del Toro's chance at finally getting involved with video games. Before THQ famously was dismantled piece-by-piece in 2012, he was working on a title by the name of Insane that still hasn't seen the light of day. Maybe that could change soon.

The cutscene begins around 1:16

In this article: Gamescom2014, gaming, GuillermoDelToro, hd, hdpostcross, HideoKojima, SilentHill, silenthills
All products recommended by Engadget are selected by our editorial team, independent of our parent company. Some of our stories include affiliate links. If you buy something through one of these links, we may earn an affiliate commission.