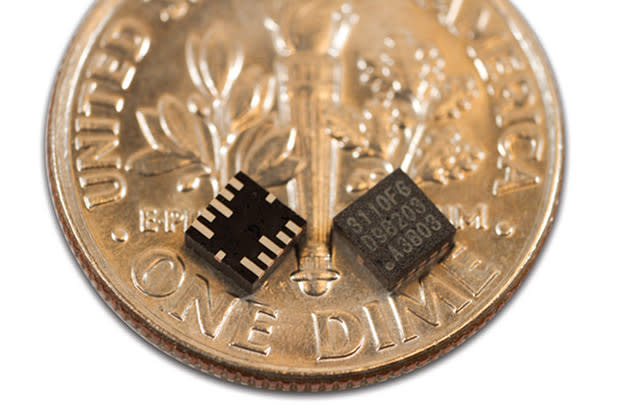 Imagine a shirt or pants that can detect movement and tell you if that golf swing was weak or that jump shot was a bit lacking. That's the biggest goal of a company called mCube: to have its new and really tiny accelerometer embedded in clothing, though it could obviously be used for sports bands and other devices, as well. At just one millimeter across, the new motion detector measures but less than half of traditional ones. More importantly, it combines the accelerometer component that detects movement and the other that processes signals and data gathered by the first one, which are typically separate. This allows the chip to be power efficient, cheaper and -- according to mCube, at least -- more accurate than alternatives. mCube even believes that the device is effective enough to provide motion detection for super cheap phones without gyroscopes. While the company hasn't announced which devices will carry the product, we'll likely come across one of 'em soon enough, as mCube has already shipped 70 million units to China.

In this article: accelerometer
All products recommended by Engadget are selected by our editorial team, independent of our parent company. Some of our stories include affiliate links. If you buy something through one of these links, we may earn an affiliate commission.