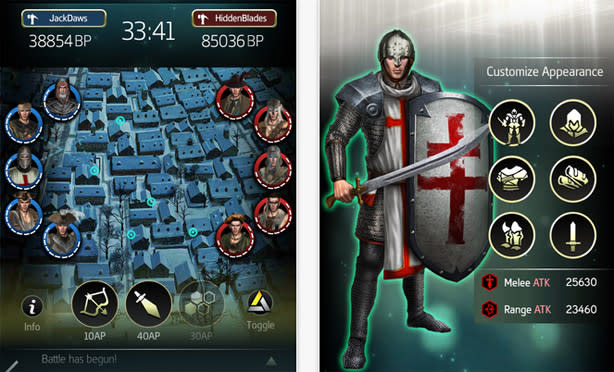 Starting today, you can look back fondly on all your favorite murderous moments from Ubisoft's Assassin's Creed series with Assassin's Creed Memories, a free-to-play mobile spinoff out now for iOS devices.

Revealed last month, Assassin's Creed Memories is a card-battling RPG that pits armies of players against one another in strategic online skirmishes. Gameplay takes place across multiple eras featured in previous Assassin's Creed games, and players can upgrade their character stats and equipment before engaging in 20 vs. 20 online guild battles.

SAN FRANCISCO, CA – August 21, 2014 - GREE, Ubisoft and PlayNext today announced the launch of Assassin's Creed® Memories, an all-new free-to-play mobile title for iPhone, iPad, and iPod Touch. Blending card battle, RPG, and strategy elements, the game takes players deeper into Abstergo Entertainment's new mobile Animus and allows them to become one of history's most powerful assassins. From collecting and fighting alongside famous characters from the Assassin's Creed universe to multiplayer guild battles in brand-new eras, this game is a unique mobile spin on the franchise spanning its centuries-long history. Assassin's Creed® Memories is now available worldwide and is free to download.

Assassin's Creed® Memories takes gamers on an epic adventure to become a master Assassin through fan-favorite periods like Renaissance Italy and Colonial America and all-new locations like feudal Japan and imperial Mongolia. Single-player missions task players with hunting boss targets, earning ally cards, and collecting new gear. Users will also be able to fully customize their play experience as they gather cards from three different categories: Weapons, Armor, and Allies. Weapons and Armor can be used to build the attack and defense stats of their characters as well as change the look of their Assassin. Allies are well-known characters from across the franchise with special abilities to aid players in combat.

Assassin's Creed® Memories also offers an exciting multiplayer experience involving 20 vs 20 player guild battles. Players can customize their attack strategy by picking and choosing their strongest members to take the front lines in any battle and working on combo attacks to win epic battles in cutthroat PvP competition.

Assassin's Creed® Memories is out now for iPhone, iPad, and iPod Touch. For more information, please visit http://www.facebook.com/assassinscreedmemories. To download the game, visit https://itunes.apple.com/us/app/assassins-creed-memories/id885419846?mt=8
In this article: assassins-creed-memories, free-to-play, ios, ipad, iphone, mobile, ubisoft
All products recommended by Engadget are selected by our editorial team, independent of our parent company. Some of our stories include affiliate links. If you buy something through one of these links, we may earn an affiliate commission.