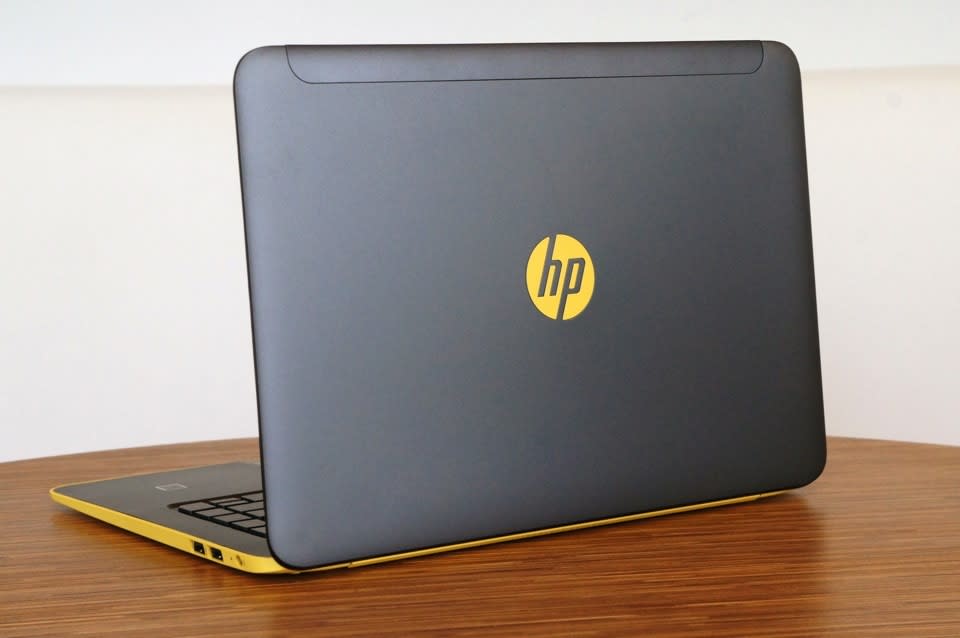 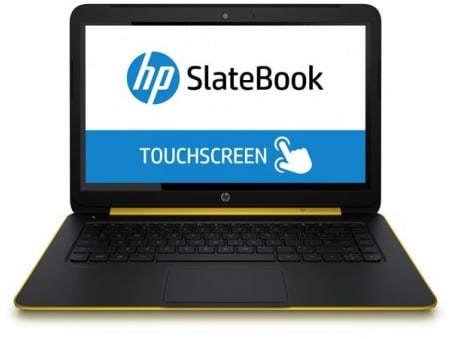 There's mounting evidence that HP, once the leading PC maker, does not know what it's doing. After announcing plans to cut up to 5 percent of its work force, the company is basically throwing stuff at the wall and seeing what sticks. Recent experiments include a luxury smartwatch, Chromebooks, a $199 Window notebook and now, a laptop running Android. Here's the sales pitch, and bear with me if this doesn't make sense: The SlateBook 14, according to HP, is for students and teens who already use Android on their mobile devices. In other words, they already own a Galaxy S5 or what have you, and they should have an Android laptop to match. The idea is that they might choose this over a Chromebook because it has more apps, and because it's more familiar. Ditto for Windows laptops -- except, you know, Windows actually has lots of apps too. Setting aside HP's flawed logic (they never said Windows users should stick to Windows Phone): Why would you pay $430 for a laptop running an OS that was primarily meant to be used with the fingers? Even with a crisp display and comfortable keyboard, the SlateBook 14 doesn't have enough to recommend it. With an operating system that was never meant to be used on a laptop, it's a poor choice compared to less-expensive Windows laptops and Chromebooks.

Be the first to review the SlateBook 14?
Your ratings help us make the buyer’s guide better for everyone.
Write a review

Take what I say here with a grain of salt: The same way Vogue editor Anna Wintour is allowed to like a dress covered in futuristic space-snails, I'm allowed to like a laptop decked out in Lamborghini yellow. Personally, I kinda dig how the black lid and keyboard deck contrast with the bright hinge and sides. The only place where HP goes too far is the bottom side of the machine. It's all yellow -- right in your face. Ditto for the prominent Beats Audio logo, located on the right side of the hinge, right in your line of sight whenever you're looking at the screen. In any case, whether you love or hate the yellow accents, I think we can agree on this: It's insane that in addition to releasing an Android laptop in the first place -- a niche product if ever there was one -- HP chose the most polarizing design possible, and didn't even offer any color options. Want that yellow to be cyan instead? Tough noogies, kiddos. You can have a yellow laptop running Android or... something else entirely.

It's a shame, because this is otherwise a fairly well-made laptop, especially for $430. The lid is made of aluminum, and while the rest is constructed from plastic, those bits still feel solid; the thing never bends when you grab it by the palm rest. The 1080p touchscreen is sharper than almost everything else I've seen in this price range, and while the LED-backlit panel doesn't provide the best viewing angles, the quality is still a big step up over every Chromebook I've tested. The keyboard is sturdy too, with well-spaced buttons that provide a decent amount of travel. And of course, Beats Audio offers better sound than what you'll get on other budget notebooks. Still, I can see where someone might overlook all of that if they couldn't get past the screaming yellow.

At 3.71 pounds, the laptop is on the heavy side. Not for a 14-inch laptop, mind you, but it's still much weightier than a smaller Android tablet with a detachable case or keyboard dock. It's also heavier than most Chromebooks, as well as some budget Windows laptops (I'm talking about the netbook-sized 11-inch models here). Considering Android isn't that useful on a laptop, I have to question whether owning a relatively heavy notebook is worth it when you could just buy a tablet or Chromebook and call it a day.

It's also not like you get that many more ports on a machine this big. As on some Chromebooks, there's a full-sized HDMI socket, a headphone jack and a memory card reader to help offset the rather paltry 16GB of built-in storage. Incidentally, that slot actually takes microSD, not SD, cards -- a normal spec for phones and tablets, but an oddity on a 14-inch laptop. All told, the main difference in I/O between this and a Chromebook is that you get three USB ports here instead of two, but I'd hardly call that a selling point.

Excuse me while I point out the obvious: Android was not designed to be used with a mouse. Personally, I use the Moto X as my daily driver. I spend more hours a day staring at KitKat than I'd like to admit. And yet, when I opened the SlateBook for the first time, I paused for a moment, unsure of what to do next. After a couple seconds, of course, I came to my senses and did what any reasonable person would do: I reached up and touched the screen. And so it went. Several days into using the SlateBook, and I've rarely touched the trackpad. It happens to be a very nice trackpad, and it comes in handy when I'm reading a website and would rather not reach across the keyboard to scroll down the page. Otherwise, though, I use my fingers, just as I would on my phone.

The same way there's only one color option for the SlateBook, there's just one spec configuration. That would be the $430 model I tested here, which has 2GB of RAM, 16GB of built-in storage and an NVIDIA Tegra 4 chip -- the same one used in the Note 7 tablet. But in a way, the performance is moot. I mean, of course you want the device to run smoothly. And it does. Apps launch quickly. The OS is quick to respond if I want to see a list of my open programs; closing and switching applications is a breeze. Web pages load quickly, albeit not as fast as most Chromebooks. The thing is, the SlateBook's quad-core Tegra 4 processor can handle even more than that. You know, like games. But on a device like this, why would you even bother? Who wants to cradle a 14-inch, 3.7-pound laptop, all so that they can tilt their way through Need For Speed? Who wants to reach across the keyboard when you could rest a tablet in your lap? And if you're content to only play browser games, why don't you use your $430 to buy a proper laptop?

The more I use the SlateBook, the more I think Android users would be better served by a tablet that can pair with either a keyboard case or detachable keyboard dock; you'd get more portability, similar battery life (more on that in a minute) and greater versatility when it comes to gaming. And yet you'd still have that keyboard when you needed it. If you're the sort of person who does a ton of typing -- email, web surfing, office docs -- you'd be better off with either a Chromebook or a Windows machine. At least those operating systems were meant to be used with a mouse.

The SlateBook 14's 32Wh battery is rated for nine hours of runtime and indeed, I got exactly nine hours and three minutes of continuous video playback (that's with WiFi on, fixed brightness and Facebook and Twitter set to poll periodically). On the one hand, that's great for a laptop; it's the sort of longevity you'd expect from a $1,000 Ultrabook, but not necessarily a bargain-basement notebook, especially not one like this with a bigger screen.

On the other hand, nine-hour battery life is only marginally better than what most Chromebooks are capable of, and again, those tend to be more portable than the machine we have here. It's also on par with Android tablets, like the new NVIDIA Shield tablet or the ASUS Transformer Pad TF103C, which costs $299 with a keyboard dock. Even if you wanted a Windows system, you could find a low-powered laptop or hybrid that delivers long battery life. (There are plenty of options in the 11-inch range.) Have I made my point clearly enough? Long battery life is not a good enough reason to buy this.

Not that it matters -- I'm recommending you don't buy this -- but the SlateBook runs Jelly Bean (version 4.3), with an upgrade to KitKat expected to arrive sometime in Q4. Thankfully, HP left Android as is; there are no skins here, no home screen panels that are impossible to remove. Nope, this is Android as Google meant it to be experienced. Really, the only mark HP left on the device is a handful of pre-installed apps. These include ones for Box.com, Evernote, Skitch, Skype, Hulu Plus, Splashtop, NVIDIA TegraZone, Kingsoft Office and CyberLink PowerDirector Mobile. You'll also find some apps from HP itself, including Connected Drive, Connected Music, Connected Photo, ePrint, Media Player and File Manager. There's also a "Games" app, which is really just a store for WildTangent titles. In any case, if none of this strikes your fancy, you can always uninstall them in the settings and free up a little bit of space.

The SlateBook is an interesting specimen. That's why I wanted to review it: because I was curious about the idea of an Android laptop, and thought you might be too. And it is interesting. But by no means should you actually buy one. The SlateBook takes Android, an otherwise intuitive operating system, and manages to make it... cumbersome. It's a pain to use with a mouse, and yet if you want to use your fingers, you have to reach across the keyboard. Because that keyboard doesn't detach, the device is far heavier than a standalone tablet, and the battery life isn't even that much better.

If you love the Android experience, just buy a tablet with a keyboard case. If the typing experience is paramount, there are Windows laptops that are less expensive and more portable. Even a Chromebook would make more sense than the SlateBook; at least Chrome OS was designed to be used with a mouse. Samsung's 13-inch Chromebook 2, for instance, has just as sharp a display and costs $30 less, and there are loads of options that are even cheaper. Frankly, I'm not sure I'd recommend an Android laptop at any price, but for $430 the answer's easy: Just don't do it.