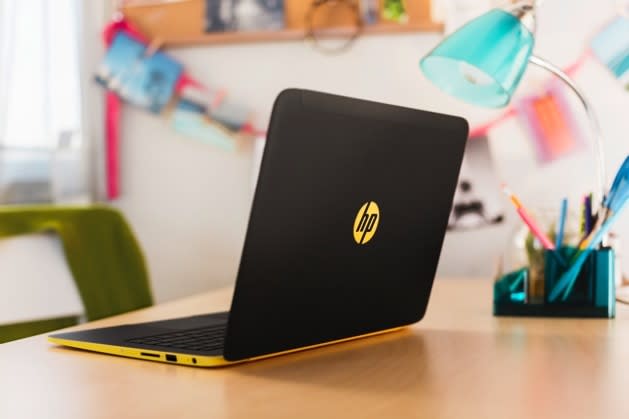 If you thought this year's Computex show would be dominated entirely by Windows machines, you're in for a little twist. HP has just revealed the SlateBook, that 14-inch Android laptop we saw in a leaked video earlier this year. In addition, HP refreshed its 11-inch Chromebook with a slightly better battery, and dropped the price from $279 to $249. And that's not even counting all the Windows systems the company just launched. Some might call this strategy "throwing spaghetti at the wall and seeing what sticks"; HP would probably just say it's hedging its bets. Either way, we've got the skinny -- but we'll leave it to you to decide which operating system makes the most sense. The SlateBook isn't the first Android clamshell we've seen. Normally, though, once we get this far up in screen size, we expect a machine to be running Windows or OS X. You know, a "real" desktop OS. Heck, we've even seen Android running on various all-in-ones. But Android on a laptop? Especially one this large? That's a horse of a different color.

What's interesting is that with these specs (an NVIDIA Tegra 4 processor, a 1080p touchscreen and a nine-hour battery), the 3.7-pound SlateBook is poised to compete against Chrome OS devices, including HP's own Chromebook 14, which costs a hundred dollars less. In particular, it matches up well against Samsung's new Chromebook 2, which also has a full HD screen and long battery life, and which costs the same as the SlateBook.

The difference, of course, comes down to which operating system functions better on a laptop. At first blush, it would seem Chrome OS is more mouse-and-keyboard friendly, but that Android has a much wider selection of apps, meaning you might be able to do more with it. The SlateBook will be available August 6th, starting at $399 $429, at which point we'd love to get one in to review so that we can live with an Android laptop and see what it's like. Until, then, though, it would appear this is your shopping dilemma, if you choose to go with either OS at all.

In this article: android, chromebook 11, chromebook11, computex2014, google, hp, HpChromebook11, hpslatebook, mobilepostcross, slatebook
All products recommended by Engadget are selected by our editorial team, independent of our parent company. Some of our stories include affiliate links. If you buy something through one of these links, we may earn an affiliate commission.