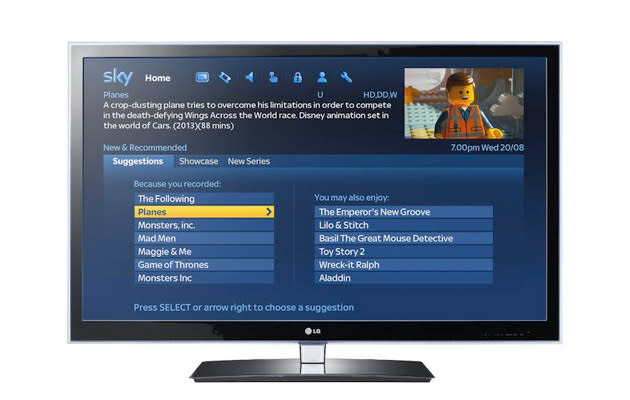 If Sky has a problem, it's that there's simply too much material for anyone to quickly and easily find what they want in a short space of time. In a world where people are very comfortable just choosing the first thing that Netflix recommends for them, it could become a very serious issue. That's why the company's latest software update for its Sky+ boxes is designed to ensure you've always got something new to watch. The first new feature is smart series link, so if you've previously told your box to record every episode of a TV series, that instruction will carry over to subsequent seasons. That way, you'll never miss the premiere episode of a returning show, even if you don't have access to your setup for some reason.

The second is a new recommendation engine that hunts through your planner and picks out alternatives depending on what you've recorded. In Sky's example, if you've got The Following on your hard-drive, then it'll suggest other gritty crime dramas like Luther, Hannibal and Criminal Minds that might be to your taste. The Sky Store and Sky Movies sections have also received face lifts, now showing you the DVD cover art of particular titles, which was probably prompted by the rise of services like Netflix.

Despite the growing popularity of Netflix, Amazon Instant and even the company's own Now TV, Sky still has plenty of love to show its live TV offerings. The entertainment category, for instance, has taken over the lifestyle section, and there's now a new tile that'll send you straight to any live sports that are being broadcast. Other amendments include HDMI One Touch, so when you hit the Sky button on your remote, the connected TV will also activate, improved viewing card pairing and combined SD/HD options so you can pick and choose your preferred definition when downloading shows. The update is rolling out progressively to all 8 million Sky+HD customers in the next few weeks, with everyone expected to receive the new software by "winter."

In this article: Electronic Program Guide, EPG, hdpostcross, Sky, Sky+HD
All products recommended by Engadget are selected by our editorial team, independent of our parent company. Some of our stories include affiliate links. If you buy something through one of these links, we may earn an affiliate commission.