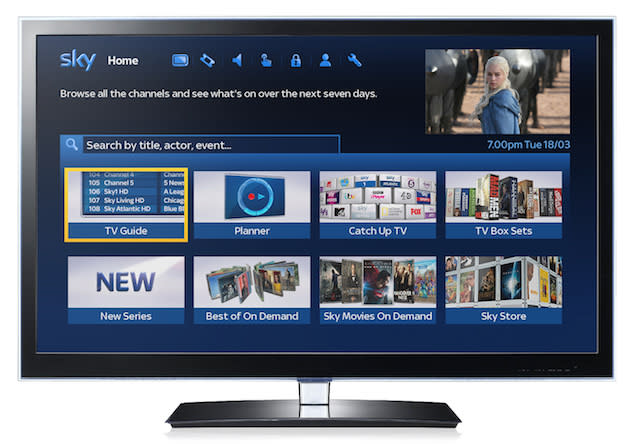 In an effort to put more content at the touch of viewers' fingertips, Sky's bringing together live TV and online content as part of a new 'Homepage' rollout for Sky+ boxes. As part of the update, the company has combined Catch Up TV, Sky Store, and Sky+ Planner for the first time, giving them equal prominence in its new tile-based electronic program guide (EPG). The reasons behind the change are clear: Sky recognized the importance of online streaming and on-demand television early on and has developed various services that can compete with Virgin Media, Netflix, Amazon Instant Video and Apple's iTunes in their own right. Now it wants people to use them more. To mirror the changes on its set-top boxes, Sky says the Sky+ app will also receive an update, in which it will gain an option to turn Sky+HD boxes on and off from a mobile device. While the new Homepage will be available from today, it may take until the end of May for it to become available for all.

In this article: catchup tv, epg, hdpostcross, on demand, sky, sky+, streaming
All products recommended by Engadget are selected by our editorial team, independent of our parent company. Some of our stories include affiliate links. If you buy something through one of these links, we may earn an affiliate commission.