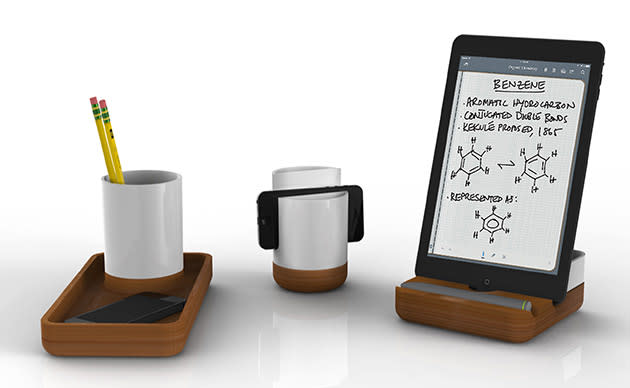 The idea of Evernote selling physical goodies might have seemed weird at first, but people took to it quickly, enough (the company says) for the merchandise to rake in $8 million in revenues since fall. If that's true, then it's not surprising that the company's come up with a new line of items, this time focusing on ones a bit less intriguing than Evernote-branded socks. The app's creators have partnered with California designer Eric Pfeiffer to put their own spin on stackable cups, trays and tablet docks for your office. While the tray and the tablet dock are made of wood and only come in one variant each, you can choose between cups with wooden and brightly colored bases. These items are now available on Evernote Market for $20 to $50, with the dock being the most expensive of the bunch. Also, the company's launching Evernote Market in China at the same time, loaded with items both from this new line and the old one.

According to a company rep, Evernote's conjured up a new line of physical goods, because it "wants to own both your digital and physical workspace, and help you keep it organized and pleasing." In fact, it's launching even bigger desktop furniture on October 4th, at this year's Evernote Conference in San Francisco

In this article: EverNote
All products recommended by Engadget are selected by our editorial team, independent of our parent company. Some of our stories include affiliate links. If you buy something through one of these links, we may earn an affiliate commission.