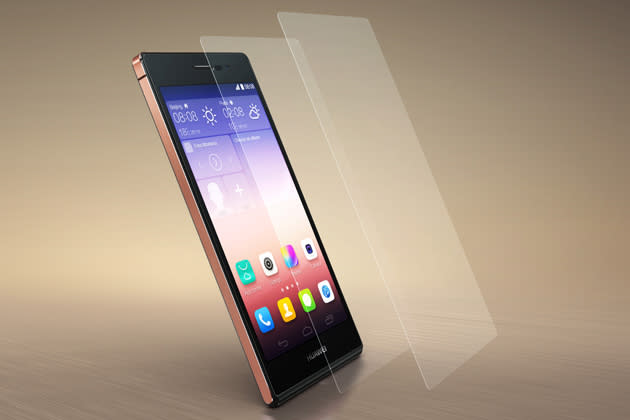 Rumors of the next-gen iPhone donning a scratch-proof sapphire screen have been going around since the Apple sapphire plant announcement, and it appears that Huawei wants in on the hype, as it prepares for the launch of a sapphire edition Ascend P7. While no price has been announced just yet (it'll naturally be more expensive, of course), a Huawei rep told us that said phone will be available in its Chinese online store in limited quantity, with the first batch due in September, followed by another lot in November. If all goes well, Huawei will become the first Chinese brand to sell a smartphone with a sapphire screen, but it'll have to act fast as local rivals Xiaomi and Vivo are also rumored to be mulling sapphire devices.

The scarcity of the special edition P7 casts doubt on the feasibility of making large sapphire screens more mainstream: It's very costly, plus the hard material becomes more brittle when scaled up, as our own Brad Molen established from multiple interviews. Having said that, the sapphire-encased Kyocera Brigadier is already available stateside for a mere $400 off-contract, so it's just a matter of time before everyone else gets their hands on the same screen supplier.

In this article: android, ascendp7, china, huawei, mobilepostcross, p7, phone, sapphire
All products recommended by Engadget are selected by our editorial team, independent of our parent company. Some of our stories include affiliate links. If you buy something through one of these links, we may earn an affiliate commission.