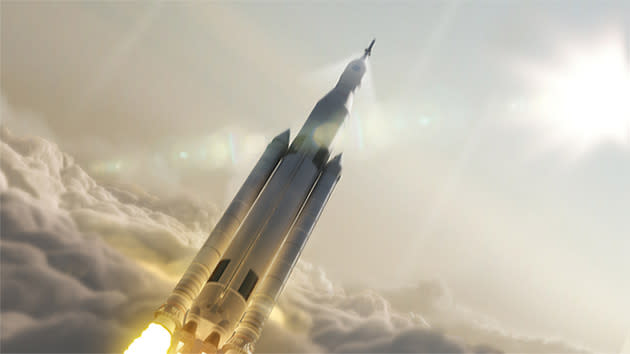 Upstarts like SpaceX might get most of the attention, but let's not forget that NASA -- you know, the folks who actually put 12 guys on the moon -- isn't done pushing to explore the heavens just yet. Case in point: the agency is working on a whopper of a rocket called (unimaginatively enough) the Space Launch System that'll eventually propel a manned Orion capsule in Mars' direction, and officials just green-lit that massive booster for development. The formulation phase is over folks, time to build this crazy thing. There is, however, a downside. You see, the SLS was originally slated to make its first official test flight with an uncrewed Orion capsule in December 2017, but it's looking at this point like that inaugural launch will actually take place nearly a year later. Yeah, we can hardly wait either, but it was going to be a long while before all the development and infrastructure fell into place anyway -- NASA associate administrator Robert Lightfoot reaffirmed in a statement that we won't be flinging humans at the red planet until the 2030s. Think you can beat that, Mr. Musk?

In this article: lockheedmartin, nasa, orion, sls, space, spacelaunchsystem
All products recommended by Engadget are selected by our editorial team, independent of our parent company. Some of our stories include affiliate links. If you buy something through one of these links, we may earn an affiliate commission.