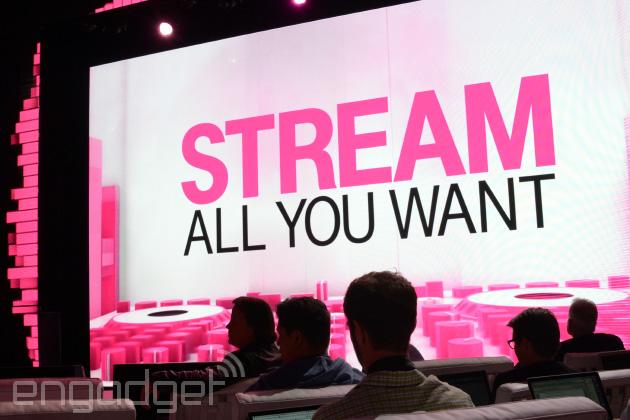 T-Mobile's Music Freedom initiative raised a few eyebrows when the Uncarrier revealed it a few months ago - it granted most-favored nation status to a handful of music streaming services so whatever data they used wouldn't count against your monthly data cap. With Pandora, Spotify, iTunes Radio in the mix, the move seemed like a win for consumers... unless you happened to pay someone else to get your streaming fix. Thankfully, T-Mobile is finally expanding the list of supported services to include beloved also-rans like Rdio, Google-owned Songza, and more. Support for the six new streaming services has gone into effect today, but T-Mobile admitted in a statement that one fan-favorite service would take a little more time to set up. You see, the carrier kicked off a poll shortly after Music Freedom's launch to see what unsupported service people wanted to use the most. The winner? None other than Google Play Music -- hardly a surprise, but T-Mobile admitted in a statement that it won't be added to the fold until later this year.

In this article: carrier, mobilepostcross, music, musicfreedom, streaming, t-mobile, uncarrier
All products recommended by Engadget are selected by our editorial team, independent of our parent company. Some of our stories include affiliate links. If you buy something through one of these links, we may earn an affiliate commission.