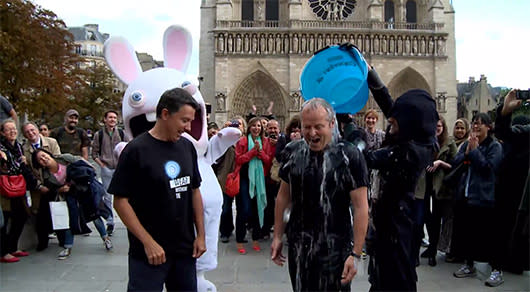 No one is immune to memetic charity, which is why Ubisoft CEO Yves Guillemot and Ubisoft EMEA executive director Alain Corre are seen below the break enduring a frigid deluge in front of Notre Dame cathedral.

Guillemot and Corre are taking part in the ALS Ice Bucket Challenge, a stunt in which the notable (and not so notable) video themselves having ice water dumped over their heads and/or donate money to the ALS Association, a non-profit dedicated to battling Lou Gehrig's Disease. Since this is an Ubisoft production, however, the two executives tapped some of the publisher's most famous characters to join in the footage, including Watch Dogs lead Aiden Pierce and Assassin's Creed: Unity protagonist Arno Dorian. And of course, there's the Rabbid who is doing an admirable job of behaving, despite his species' tendency toward chaotic, madcap hijinks.

In this article: alain-corre, als-ice-bucket-challenge, assassins-creed-unity, rabbids, ubisoft, watch-dogs, yves-guillemot
All products recommended by Engadget are selected by our editorial team, independent of our parent company. Some of our stories include affiliate links. If you buy something through one of these links, we may earn an affiliate commission.