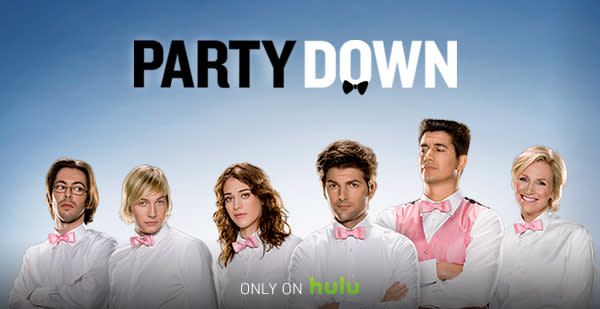 Amazon is loading up a new pilot season of original TV shows, and while Netflix's content juggernaut was shut out at the Emmys, at least it was nominated. So what can Hulu do? In addition to its own list of original shows, exclusively licensed content from UK channels and Criterion, it's added the Starz hit series Party Down, just in time for your Labor Day weekend viewing binge. The show only ran for two seasons, but all 20 episodes are ready to watch for Hulu Plus subscribers, featuring Adam Scott, Lizzy Caplan, Jane Lynch, Ken Marino, Martin Starr and Megan Mulally as employees of a Hollywood catering service. If you've somehow missed it until now, this is the perfect time to watch -- we teared up when the show disappeared from Netflix along with all of the other Starz Play content a couple of years ago. Now Hulu has picked up the license, and even if you're not a subscriber you can watch the first five episodes for free on the show page right here.

In this article: hdpostcross, hulu, huluplus, lizzycaplan, partydown, starz, starzplay, video
All products recommended by Engadget are selected by our editorial team, independent of our parent company. Some of our stories include affiliate links. If you buy something through one of these links, we may earn an affiliate commission.