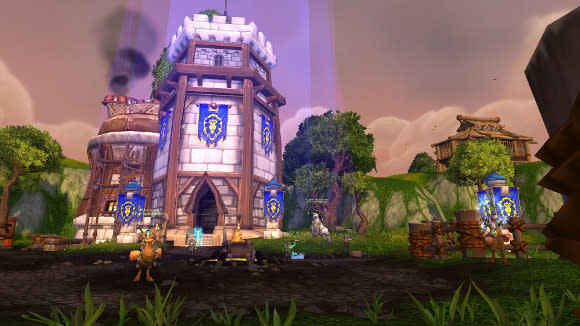 Way back in 2005, patch 1.7.0 brought with it Battleground Holidays, intended to offer additional rewards to players who participated in particular battlegrounds over a designated weekend -- later renamed the Call to Arms in Wrath of the Lich King. Since then, the familiar sight of representatives from various battlegrounds has been a staple of the Warcraft experience. As new expansions were introduced, new battlegrounds came with them, and were subsequently added to the Call to Arms rotation.

While the thought of getting bonus honor might have been pretty good incentive when the feature was first introduced, as the years have gone on, the Call to Arms weekends have been doing exactly the opposite of what they'd been introduced to accomplish. Unfortunately, some battlegrounds are still perceived as favoring one faction over another -- which means that on Call to Arms weekends, queue times can skyrocket as one side piles on to queue for the additional bonuses, and the other simply avoids the battleground altogether. So what's the solution? Removing the Call to Arms weekends altogether.

Desvin
We've removed Call to Arms in Warlords. Originally, the feature was added to bring some variety to the battleground experience and allow players who like a specific battleground to occassionally binge on it. But, like any feature, we have to weight the benefits with the consequences. Call to Arms has an adverse affect on queue times in a pretty profound way. When certain battlegrounds are up, one faction will tend to queue for Call to Arms while the other tends to avoid it. As a result, we're going to remove it so that the majority of players are queuing through Random Battlegrounds.
source
Although the Call to Arms weekends are being removed, currently players can still blacklist up to two battlegrounds of their choice, and there seems to have been no moves made to remove that particular feature. But since queue times and faction imbalance in battlegrounds both seem to be something Blizzard is actively looking at now, it stands to reason that if blacklisting continues to discourage players from particular battleground maps, or lengthens queue times, that feature may also be looked at in the future. For now, this change should help with longer queue times, and allow players to spend less time waiting, and more time actively participating in PvP.

In this article: Battleground-Weekend, battlegrounds, call-to-arms, honor, honor-points, PvP, pvp-features, warlords-of-draenor, world-of-warcraft, wow-pvp
All products recommended by Engadget are selected by our editorial team, independent of our parent company. Some of our stories include affiliate links. If you buy something through one of these links, we may earn an affiliate commission.