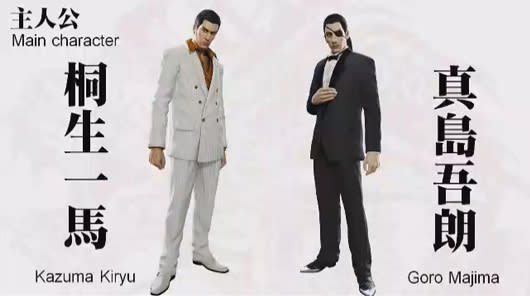 Yakuza Zero, the recently-revealed entry in the Japanese crime sim series, will take fans back to the year 1988, developer/published Sega announced at Sony's pre-Tokyo Game Show press conference. Taking place years before the first Yakuza game, the new entry in the series will focus on two protagonists: Kazuma Kiryu and Goro Majima.

The game, which is coming to PlayStation 3 and PlayStation 4, will feature cross-play with the PS Vita. Yakuza Zero is expected to start its crime spree in spring of 2015.
[Image: Sega]
In this article: playstation, playstation-japan-2014, ps3, ps4, sega, sony, tgs-2014, yakuza, yakuza-zero
All products recommended by Engadget are selected by our editorial team, independent of our parent company. Some of our stories include affiliate links. If you buy something through one of these links, we may earn an affiliate commission.