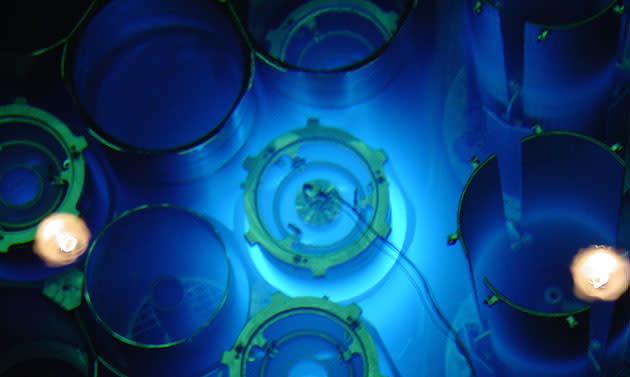 Nuclear energy could have curbed C02 emissions long ago if not for one problem: the waste is toxic for over 100,000 years. That's quite a commitment for humanity, but Hitachi thinks it has the answer: burn the spent fuel in small reactors to generate more power. That would produce manageable waste that would be harmless in a mere century or so. Hitachi has been studying such reactors for awhile with GE, and has enlisted MIT, the University of Michigan (U-M) and University of California, Berkeley (UCB) for the next phase. The goal is to re-purpose existing boiling water reactors (RBWRs), so that their turbines, safety systems and other components could be reused. Researchers could then focus on the core tech needed to burn highly refined "transuranium elements," aka spent nuclear fuel. They've enlisted the three schools to jointly analyze the safety and performance of potential core designs, with the aim of eventually building a test reactor. Commercialization is probably decades off, but the way toxic waste is building up, they may want to hustle it along.

In this article: GE, Hitachi, MIT, nuclear, NuclearPower, reactor, Transuranium, TRU, UCB, University of Michigan
All products recommended by Engadget are selected by our editorial team, independent of our parent company. Some of our stories include affiliate links. If you buy something through one of these links, we may earn an affiliate commission.