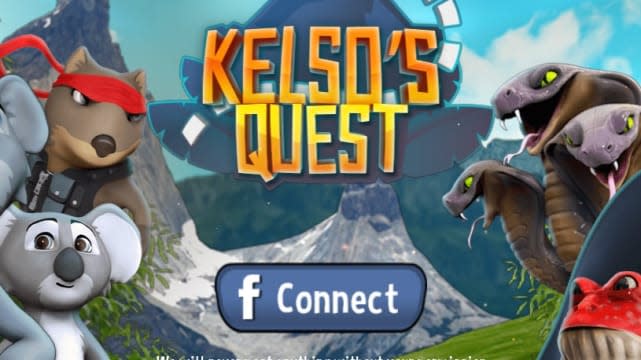 Kelso's Quest, which is free in the app store for iPhone and iPad users on iOS 5.0 or higher, is an adorable game about a Koala (Kelso), who is on the very disney-esque mission to recover his stolen cub, Nico. Kelso is assisted along the way by weird wombats, some of whom seem to be ninjas, some scientists, etc., who show up and do what they can to help out hero on his way.

The game is played from above, in standard the "map game" aesthetic, with missions along as set, linear path, around a map/landscape. The maps, like everything in this game, is slick and gorgeous. There are occasional breaks in the action for word-bubble dialogue between Kelso and other characters. Once inside the missions, your view is still from above, but instead of linear paths, you can take Kelso anywhere you wish to go by drawing the path you want him to travel with your finger. When you do so, it shows a dotted line, similar to a treasure map, which is a really nice touch. Missions are typically passed by collecting various feathers.

On the way through this down-under adventure, Kelso encounters many enemies, including totem poles that fire poison blow-darts (one hit will kill you), predatory vultures above head, weird lizards that sleep most of the time (but wake up and try to kill you), among other weird, slightly psychedelic, but lovable foes. In-between missions, the game even gives you fun facts about the real-life versions of the creatures in the game, largely focusing on Koalas and Wombats. The game starts you with five lives and you accumulate gold pieces for completed missions, side games, etc. Then the trouble comes in. It costs gold to immediately continue this game. If you inevitably run out of gold and lives, your options are pretty lame. You can either spend actual money on more imaginary gold, you can sign up for mailing lists and give personal information to advertisers in exchange for more imaginary gold, or (worst of all) you can take the free route: they make you wait long periods of time to continue with 1 new life. The first time you go this way, the game forces you to wait 10min to resume play, the next time 15min, and (if you're like me) your patience will be gone at that point.

So, if you want to play a really well animated game with a well planned storyline and fun controls, Kelso's Quest is definitely the game for you, assuming you don't want to be thrown into the jaws of advertisers or forced to wait half an hour before continuing to enjoy it. A lot about this game could be excellent, but I cannot recommend it, unfortunately.

In this article: Adventure games, free games, game reviews, iOS 5, ipad 2, iphone, koalas, review, reviews
All products recommended by Engadget are selected by our editorial team, independent of our parent company. Some of our stories include affiliate links. If you buy something through one of these links, we may earn an affiliate commission.