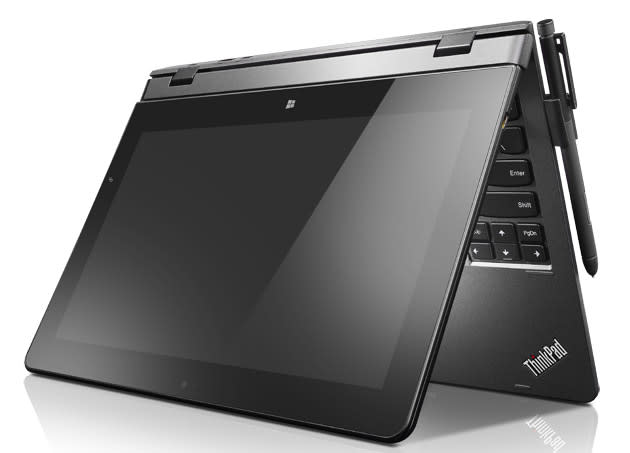 Lenovo's ThinkPad Helix Windows convertible was always a promising device. Here was a tablet that could fit into its keyboard dock with the screen facing forward or backward. It had a full HD display and an active digitizer for pressure-sensitive pen input. Best of all, it used proper laptop-grade processors, ensuring you'd get performance more in line with an Ultrabook than a standalone tablet. Sure, its weird cooling flap and pointy dock-guides made it cumbersome to use, but in spirit, at least, we were on board. We hoped Lenovo would try again with a refreshed design. At last, the company has done just that -- more than a year after the original first went on sale. The new Helix arrives later this fall with a thinner, fanless design, not to mention slightly longer battery life.

As Lenovo tells it, the company's design team held off on refreshing the Helix until Intel's Core M processors came out. These chips, based on Intel's "Broadwell" architecture, allow for thinner, fanless Windows PCs. Not like an Atom-powered tablet, mind you, but full-fledged, laptop-grade performance inside a tablet. Just without the fans and cooling flap that annoyed us so much the first time around. The tablet alone weighs the same, at 1.8 pounds, but it now measures 0.38 inch thick, down from half an inch.

Other than that slimmer profile, the other big improvement is in battery life. The tablet now promises up to 12 hours with the keyboard dock, versus 10 on the original. As it turns out, most of the enhancements come from the tablet, not the dock: Even on its own, the slate is now rated for eight hours of runtime, up from four. The dock actually promises less runtime than it did last year.

Speaking of the keyboard dock, you actually get two options for a change. When the Helix goes on sale in October, you'll be able to buy it with a magnetic keyboard that connects via small pins at the bottom (meaning, it's not Bluetooth). Starting in January, when Intel's business-class vPro Core M chips become available, Lenovo will also start selling a "Pro" keyboard that looks similar to the one on last year's Helix, complete with a rotating hinge and the signature red TrackPoint. The Pro does still have guides that jut out from the device, though they're thankfully less pointy this time around. If we're honest, you might want to wait for this one instead of settling for the magnetic keyboard, which doesn't have a built-in battery, and which doesn't allow you to adjust the screen angle the way you can on the Pro.

As for other key specs -- 400-nit (1080p) display, dual 5MP/2MP cameras -- not much has changed since last year. Also like the original Helix, it'll be offered with a Wacom digitizer, with a slot on board to stow the pen. Hey, if you live in the US, it won't even be an "option"; it'll just come standard. Once it arrives in October, it'll start at $999 with the pen and magnetic keyboard. No word yet how much the tablet will cost with the Pro keyboard, but we're hearing around $1,200 and up. Don't take our word on that, though -- the price isn't final.

In this article: hands-on, helix, ifa, ifa2014, lenovo, lenovo thinkpad helix, LenovoThinkpadHelix, thinkpad helix, thinkpadhelix
All products recommended by Engadget are selected by our editorial team, independent of our parent company. Some of our stories include affiliate links. If you buy something through one of these links, we may earn an affiliate commission.