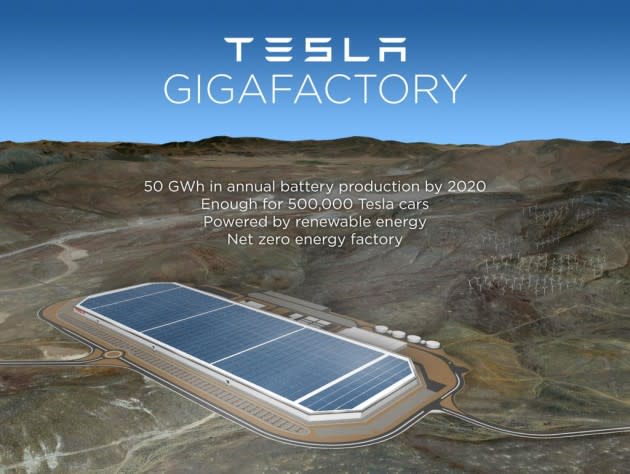 Tesla Motors is going to need to expand production to hit its goal of selling a $35,000 electric vehicle by 2017, and as rumored, today it's announcing plans for a new plant in Nevada that will help it get there. Several states were in the running to host the "Gigafactory" (and its 6,500~ jobs) but Elon Musk and Co. have chosen to put down roots in the Reno area. According to local papers like the Reno Gazette-Journal, that's why Nevada Gov. Brian Sandoval will ask the state legislature to approve a $1.25 billion tax incentive package to make the deal stick. According to Elon Musk, the factory will use solar, wind and geothermal energy to produce all of the energy it needs as a "net zero energy factory." As seen above, it's supposed to produce 50 GWh in annual battery production by 2020, enough to power 500,000 of Tesla's cars. The deal is being announced right now at a press conference, check out the live video after the break to follow along (update: the live stream appears to have died, but Jason Hidalgo of the Reno Gazette-Journal is live tweeting Musk's statements).

We have reached an agreement with Tesla Motor Company. #AllNevada pic.twitter.com/Z9zeDdVkuN

Musk: #Tesla gigafactory will be bigger than all lithium ion factories in world combined #tech #automotive

In this article: battery, gigafactory, nevada, panasonic, tesla, teslamotors, video
All products recommended by Engadget are selected by our editorial team, independent of our parent company. Some of our stories include affiliate links. If you buy something through one of these links, we may earn an affiliate commission.