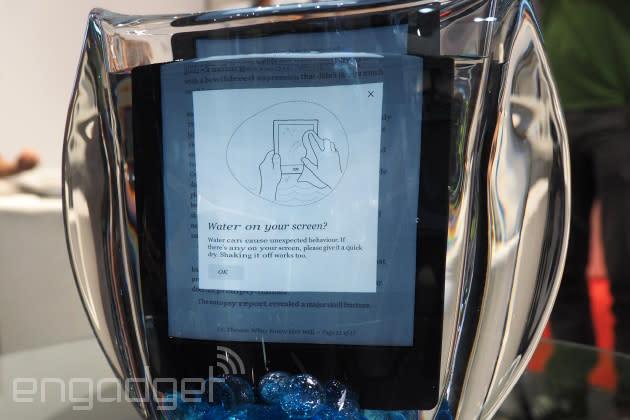 When Kobo launched the Aura, the idea of selling a premium e-reader with a top-line price and a big screen was something of a risk compared to the Kindle juggernaut. When the device went on to become responsible for a full quarter of the Canadian company's sales, it was clear that the risk had paid off. Naturally, when it came time for the Kobo Aura H20 to make its debut, the company decided that the next frontier would be to try and conquer an e-reader's deadliest foe: water. Kobo's major inspiration for adding waterproofing to the device was a reader competition on Facebook, when the company asked its readers to take pictures of them using the device. More than a few took point-of-view shots of them reading while laying in the bath -- with the device safely nestled inside a Ziploc bag. That's why it sought to remove buttons (the backlight switch has been ditched) and all of the ports are nestled behind a sealed rubber gasket at the base.

Of course, you all want to know what the Aura H20 is like to use. In fact, the new hardware is thinner and lighter than its predecessor, and it's a lot more comfortable in the hand. The (relatively) new E Ink Carta display is significantly better than the Pearl used in prior units, and processing power has gotten to the point where there's almost no lag when switching between pages -- in fact, we're told the speed is 450ms. Since the backlight button has been ditched, you can now activate it by stroking your hand down the left side of the display, or little flicks if you don't want to move that much.

When dunked in a glass of water, which it'll handle for 30 minutes up to depths of a meter, an error message pops up over your text, informing you that you need to wipe the unit down when you get a second. Naturally, you can dismiss this message and continue to read, but we'd imagine that you'd probably want to get out of the pool first. The waterproofing also enables you to rinse the device, so should you spill a glass of wine or Coke, you'll be able to blast the sugar away before it congeals guilt-free -- unless, of course, you leave the port cover open. As before, Kobo is planning to launch the Aura H20 into people's homes on October 1st, priced up at $180 in the US/Canada, £140 in the UK €180 in the various European nations where available.

In this article: Aura H20, hands-on, iFA2014, Kobo, Kobo Aura H20
All products recommended by Engadget are selected by our editorial team, independent of our parent company. Some of our stories include affiliate links. If you buy something through one of these links, we may earn an affiliate commission.