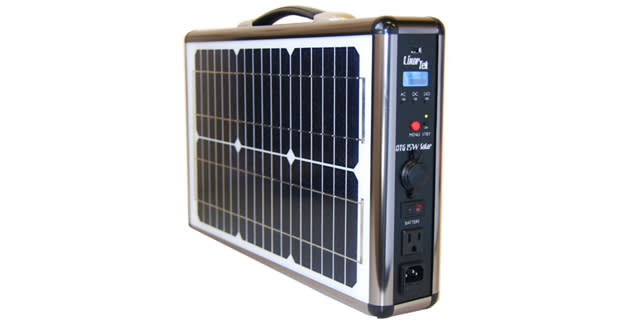 It's been a bright summer for solar energy -- Samoa just cut the ribbon on the largest solar array in the South Pacific, and even Saudi Arabia -- the country with one of the largest oil reserves in the world -- is investing heavily in photovoltaic technology. We also showcased an awesome energy-generating briefcase that lets you carry solar power everywhere you go! In other renewable energy news, Seoul, Korea, is planning to install new hydro-powered charging stations so that residents can keep their mobile devices charged. The city will install mini hydroelectric turbines embedded in the Cheonggyecheon River, which runs through the capital's downtown. And a town in Denmark just unveiled an amazing Energy Tower that transforms trash into electricity!

Speaking of waste, Swedish officials recently announced that the country now recycles or reuses 99 percent of its trash. Lawmakers in California just passed the country's first statewide ban on plastic bags. The ban could go into effect as soon as January 1, 2015. Meanwhile, 19-year-old Boyan Slat is currently raising funds for his ocean cleanup array -- a device that could rid the seas of plastic pollution. So far, the project has raised $1.6 million, and it has just a few days left to hit its $2 million funding goal. And the famous yarn bomber Olek caused a bit of a stir -- not the good kind -- when she performed one of her "interventions" earlier this month on Jason deCaires Taylor's famous underwater sculptures in Cancun. Mexican authorities contend that the yarn may have damaged some endangered species.

Volkswagen just announced the pricing details for the e-Golf electric car, its first EV to be offered in the United States, this week. The car will start at $36,265 before any state or federal subsidies when it arrives in November. In other green transportation developments, San Francisco is poised to get its first raised bikeway next year. The development will include permeable pavement, two new plazas and a protected bike path that is separated from both the street and the sidewalk. In England, the UK's Airports Commission rejected Foster + Partners' plans for a new international airport in England's Thames Estuary. And elsewhere in the Thames, a gigantic, larger-than-life hippo has been spotted basking in the sun!

School's in session -- and Inhabitat just launched two contests to help students prepare for a green academic year! High school or college students can win a brand-new bike or a solar-powered backpack, and parents can win $100 in green school supplies for their kids. In other news, a German artist buried $16,000 worth of gold in a sandy beach in England. The artist, Michael Sailstorfer, expects people to flock to the beach to dig it up. "Some people will get lucky; some people will not get lucky -– and that's life." Meanwhile, an artist in Brooklyn hooked himself up to a CNC machine to draw a self-portrait using his own blood. "By creating a self-portrait, the work references other culturally symbolic ideas to do with narcissism and inward thinking -- the essence of the 'selfie,' which is clearly having its moment," Ted Lawson said. And just for fun, we shared the latest in juice-making technology: using underwater shockwaves to liquefy the insides of veggies so you can pop in a straw and take a sip!

In this article: eco, ecofriendly, environment, green, inhabitatsweekingreen, solar, transportation
All products recommended by Engadget are selected by our editorial team, independent of our parent company. Some of our stories include affiliate links. If you buy something through one of these links, we may earn an affiliate commission.