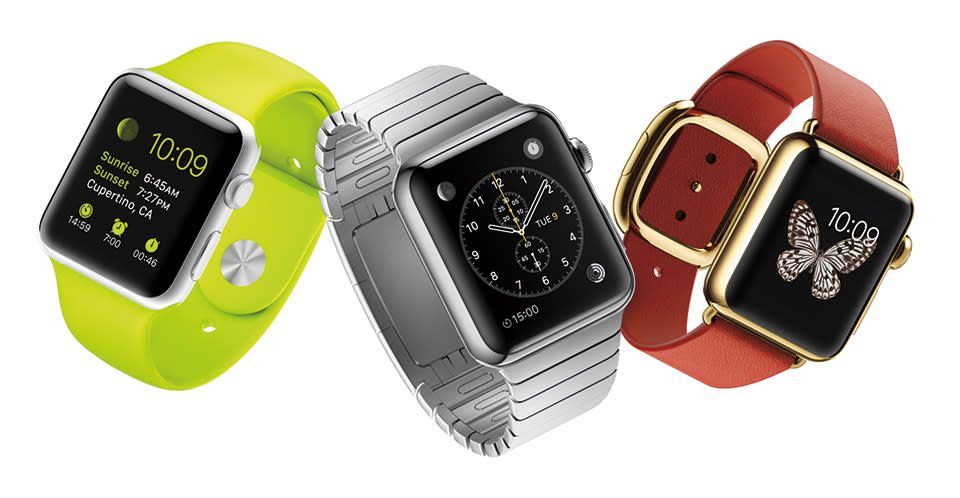 If you're tired of rumors and speculation about Cupertino's so-called iWatch, then good news -- that all ends today. Apple has just confirmed the arrival of its first fully fledged wearable device -- Apple Watch. How much of what we heard in the run up to the event was true? How does it compare to the recent slew of Android smartwatches? In typical Apple fashion, the device has a few surprises.

First up some top-level details: Apple Watch has a sapphire display, four sensors on the back, NFC, Apple Pay and a choice of six straps at launch. Of course, they use a proprietary connecting mechanism, which means you can't just run out and buy any old watchband. Apple also claims it's accurate to 50ms and is the "most personal device we've ever created." Probably to the surprise of many, the new watch isn't Swiss-style at all, in fact sharing much of the iPhone's design language -- curved edges and a power button on the side. There's also a hardware dial, just like on a regular watch, that Apple is calling a "Digital Crown," which can be used to navigate menus, zoom into images and more. A big heads-up: You'll need an iPhone 5 or above and $350 if you want one of these when they become available "early next year." How will it work? Apple CEO Tim Cook is keen to assure that his team didn't want to create a boiled-down iPhone -- joking that there's no pinch-to-zoom, etc. In a similar way to how Samsung's Gear watches work, the Apple Watch knows when you lift your wrist to look at it, and activates the display (and shows you some apps). If you were wondering about how you'll charge it, it uses inductive charging, but actually uses something that looks quite a lot like a small MagSafe. Other rumored details that turned out to be true include the flexible display (that can apparently determine between a tap and a press), and a heart rate monitor.

Worried that you won't get along with a watch that everyone else also has? Apple has thought of that, and has created three watch "collections" called Apple Watch, Apple Watch Sport and Apple Watch Edition. The main differences being the finishes: aluminum, stainless steel and 18-karat gold (that's Edition)! There's a choice of two sizes also. The bad news is: You'll need an iPhone to go alongside it (the watch has WiFi and Bluetooth 4.0), whichever one you choose. Also, as you'd expect, Apple Watch does notifications, so you can see meetings and message alerts -- many of these are actionable too, so you can decline an invite without reaching for the phone. As we'd heard earlier in the week, there will be dedicated apps for the Apple Watch, both from third parties (American Airlines, City Mapper) and Apple (such as maps with navigation, etc.) -- described as "iOS-based."

What about fitness credentials? Yup, that's a big part of Apple Watch, too, with Cook stating: "It's a very important area for me, and important for Apple." What that really means is that it will act as a fitness tracker, and a dedicated sports watch, complete with "Activity" and "Workout" apps (but you'll need your iPhone's GPS for tracking a run -- BOO!). The activity apps do sound a little more than just a basic step counter though. For example, they'll use a mix of data from the watch (like your pulse) and your phone (for more detailed distance measuring), to build a more "complete" picture of your daily physical output. Expect even more apps, especially those from third parties to be announced between now and that ambiguous 2015 launch date.

11
In this article: apple, applewatch, iPhoneEvent2014, iwatch, mobilepostcross, poll, wedgies
All products recommended by Engadget are selected by our editorial team, independent of our parent company. Some of our stories include affiliate links. If you buy something through one of these links, we may earn an affiliate commission.