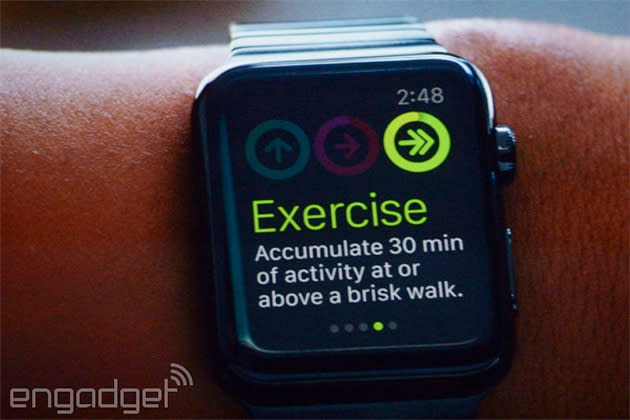 Does the Apple Watch spell doom for dedicated fitness devices from Fitbit, Withings and Jawbone? Certainly, it looks as if you won't need one if you own Apple's first wearable, since the device ships with a pair of apps specifically designed to track fitness. The first is Activity, which measures the quantity of your sitting, standing and movement on a daily basis. There are three "rings" on the display, and you make each one disappear by performing the requisite amount of movement for each one. For instance, the exercise ring will disappear if you've moved at a pace above a brisk walk for more than 30 minutes in a single day. The move ring, meanwhile, will disappear when you've burned off a predetermined quantity of calories, and the standing ring disappears if you get up and stand for a single minute each hour, for 12 hours. Apple claims that Activity will learn your daily patterns, and when it senses that you're chilling out on the couch, it will give you a Jawbone-esque reminder to get up off the couch -- just like your very own personal trainer.

Then there's the Workout app, which covers those moments when you dress up in Lycra and utter phrases like, "I'm gonna give 110 percent!" The app uses the built-in accelerometer to measure your total body movement, the optical heart rate monitor under the case to measure intensity and the GPS/WiFi from your iPhone to provide accurate mapping. Here, you can set a goal based on a target of calories burned, time spent exercising or distance covered and the Apple Watch will keep you updated as to your progress. Naturally, both apps will save their data to the Health app on your iPhone, where everything will be neatly aggregated and available for third-party apps of your choice to access. Will it be better than a dedicated running watch? Well, that's a question we'll have to answer in our review.

Check out our 2014 Apple Event liveblog!

In this article: Activity, Activity Tracker, apple, Apple Watch, Health, HealthKit, iPhoneEvent2014, mobilepostcross, Watch, Workout
All products recommended by Engadget are selected by our editorial team, independent of our parent company. Some of our stories include affiliate links. If you buy something through one of these links, we may earn an affiliate commission.