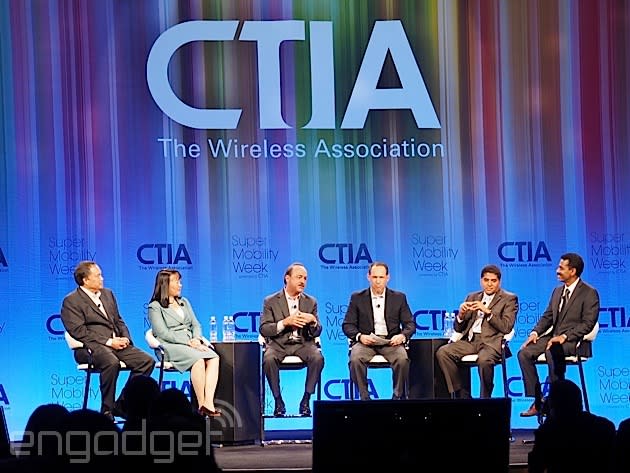 Hot on the heels of AT&T's recent announcement that it would be beefing up its connected car offerings, Ralph de la Vega, who's now the chief executive of AT&T's Mobile and Business Solutions group, chaired a panel at CTIA earlier today to make the case for the internet-enabled vehicle. "The connected car will change the entire wireless industry," said de la Vega, adding that based on research by Strategy Analytics, nearly 10 million "four-wheeled smartphones" will be on the road in just a few years.

He along with AT&T Mobility CEO Glenn Lurie also touted AT&T's mobile share value plans where you can add your car as one of your devices for $10 a month, plus the overall carrier's intent to deploy LTE in more cars this year. Just today, for example, Audi announced that the 2015 Q3 crossover will get HSPA+ wireless connectivity from AT&T -- it already announced that its A3 sedans will come equipped with LTE earlier this year.

And that's not all. Mary Chan, GM's president of its global consumer group, was also on stage to reiterate GM's intent to deploy 4G LTE in more than 33 models across the company. Additionally, she said that OnStar, GM's in-car connectivity service that's powered by AT&T, will be introduced to Europe starting in 2015 in select countries -- a deal that's been a long time coming. Tesla's CIO Jay Vijayan was there as well to tout the benefits of having a car that can download updates over the air. "It's super low maintenance," he said. "There's no need to bring the car to a dealership for that."

Also on the panel was Arun Bhikshesvaran, Ericsson's CMO, who said that according to an internal study, about 50 percent of those surveyed would switch brands for a connected car. And of course, to make it all work seamlessly, clear and natural voice commands are key to the process, which is what Mike Kennewick, co-founder and CEO of VoiceBox, is working on. "It's imperative that as we introduce the internet to cars, we have to help people interact [with it] safely."

"The connected car is the new wave of wireless," said de la Vega. "Technology will make the car safer and more intuitive, and it'll be more entertaining for the passenger."

In this article: att, ctia, ctia2014, europe, generalmotors, gm, onstar, supermobilityweek, supermobilityweek2014
All products recommended by Engadget are selected by our editorial team, independent of our parent company. Some of our stories include affiliate links. If you buy something through one of these links, we may earn an affiliate commission.