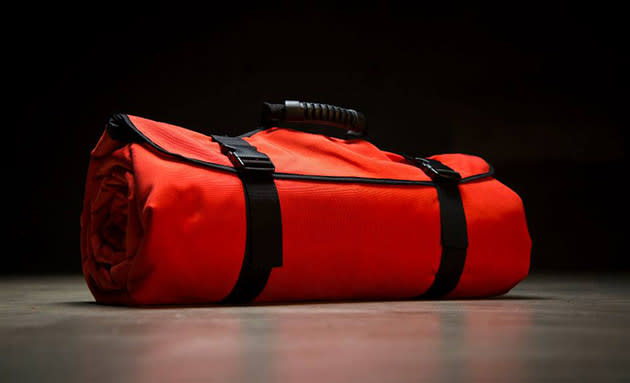 Rolled up, the Tuuli Armor looks like any other sleeping bag, but according to its inventor, it can safeguard you from something much harsher than insects and the cold. Apparently, the bag was designed to protect you during tornados, and while it can't exactly prevent broken bones, it can shield you from debris and shrapnel flying faster than 200 mph. That's because it was made using ballistic nylon that soldiers use on the battlefield -- its Missouri-based creator Steve Anderson even bombarded it with bits of wood, metal and glass using an air cannon to test it out.

The Tuuli Armor's big enough to fit two adults and a kid, and while it doesn't have air holes, breathing through its material is like "breathing through a light t-shirt," or so its Indiegogo campaign claims. One bag will set you back at least $350 on the crowdfunding website (ETA is in February 2015), where Anderson's trying to raise $105,000 for mass production. Obviously, it can only protect you from tornadoes not strong enough to rip houses off the ground, so it may be best to keep those underground shelters replenished, just in case.

In this article: disaster, gadgetry, gadgets, gear, IndieGoGo, SleepingBag, TL17HLP
All products recommended by Engadget are selected by our editorial team, independent of our parent company. Some of our stories include affiliate links. If you buy something through one of these links, we may earn an affiliate commission.