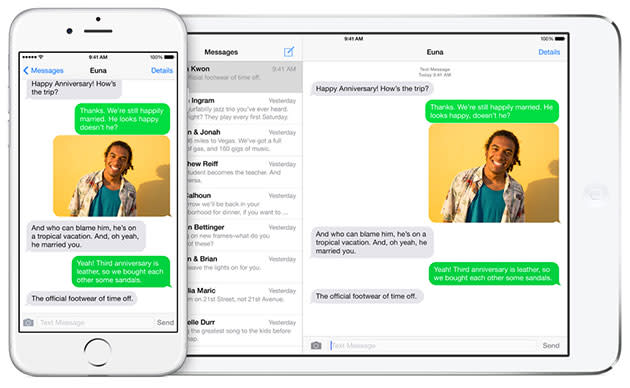 On a page for iOS 8's Continuity offering, Apple updated the section about SMS/MMS messaging to state that the feature won't arrive when the new OS does on the 17th. Back at WWDC, the folks in Cupertino touted the new tool that would allow users to send texts and make calls from an iPad or Mac, but now it looks like the messaging bit it won't go live until next month. Of course, OS X Yosemite is scheduled to arrive sometime this fall, and it's quite possible you'll be able to leverage Continuity's texting by the time the desktop software starts to roll out. Apple doesn't have the best track record for releasing cloud-based features though, as we saw with MobileMe's issues in 2008, so we'll let it take some time to work out the kinks.

In this article: apple, continuity, ios, ios8, mms, mobilepostcross, sms, texting
All products recommended by Engadget are selected by our editorial team, independent of our parent company. Some of our stories include affiliate links. If you buy something through one of these links, we may earn an affiliate commission.