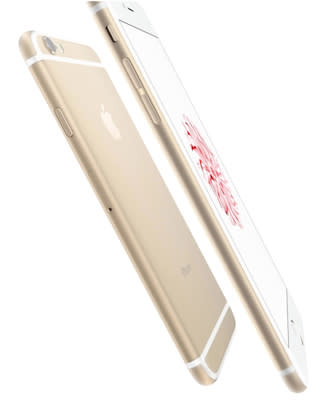 If you were one of the crazy ones, the misfits, the rebels, the troublemakers, all staying up late last night to pre-order an iPhone 6 or 6 Plus, you probably noticed that the roll-out didn't proceed as smoothly as it might have, especially at the US store. With store-down notices going on significantly beyond the 12AM Pacific launch time, it was a mad scramble trying to get an early-shipped device. Outages were so bad that some people started hearing imaginary Mandarin audio tracks floating through their heads.

I quickly found out, as did many others, that the iOS-based Apple store app offered the best chance for a pre-order. I hopped in, fully intending to pick up a mid-range 64 GB Space Gray iPhone 6 Plus unit. This is what I call the "accountant's special", as it offers the best mix of subdued coloring and storage value. Apparently, nearly every one else in the Internets hoped to pick up exactly that model since it showed "not available" from the moment I finally got past the AT&T upgrade screen.

In fact, the only model I could order with a quick ship date was the 128GB Gold. I'm not terribly against the whole 128GB storage as I can basically put every bit of data I own on my phone along with the gross domestic data product of several small countries but the gold color, well, I'd like to think that I have, er, had, standards.

Ever since the gold iPhone 5s debuted, its taste level has been subject to debate. Caught between "shameful bling" and "understated elegance", there fewer people who can figuratively carry it off than people who literally carry it in their purse or pocket.

I know for sure that I'm not one of them. Sure, I'm trying to make the best of things -- I'm calling it "Fawkes" after the phoenix in Harry Potter, although I was tempted with "Deputy Parrish" for the ambiguously phoenix-y character on Teen Wolf -- but to me, gold color has always been something that happens to other people. People who live in Florida. Who have fabulous houses. Who drive nice cars and drink champagne. People to whom "lamé" is a metallic fabric and not an MP3 encoder.

Steve Sande tells me that he's about to sell his gold iPhone 5s to Gazelle, adding "I've hidden it in a Mophie case for a year". What do you think of the gold iPhone? Cast your vote in this poll and then drop a comment about how your pre-order went. What model and color did you go for? And when do you expect it to arrive or be ready for pickup?

In this article: Apple, ATT, Gazelle, Harry Potter, humor, iPhone, iPhone 6, iPhone 6 Plus, Mophie, MP3, poll
All products recommended by Engadget are selected by our editorial team, independent of our parent company. Some of our stories include affiliate links. If you buy something through one of these links, we may earn an affiliate commission.