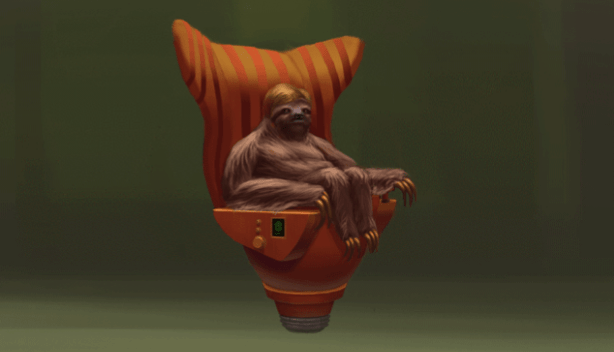 Paradigm is an in-development point-and-click adventure from Jacob Janerka, an independent game developer from Australia. To call it "surreal" would not encompass the sheer absurdity on display here.

In Paradigm, players control a lab-grown mutant who dreams of becoming the best electronic musician in the world. Along his journey to produce his EP (and save the world), he'll come across a beatboxing eggplant, a pug who is also a professional wrestler, and an evil sloth with Donald Trump hair named Olof.

Janerka is currently seeking $14,000 AUD on Kickstarter to finish his game, and at time of writing, his campaign has amassed just more than $8,000 AUD, with 22 days left for backers to pledge. If you want to get an idea of the game's quality before you fork over your cash though, there's a downloadable alpha available via the Kickstarter page.

Paradigm is slated to be completed and shipped mid-2015 on Windows, Mac and Linux. Paradigm is also on Steam Greenlight, awaiting enough votes so that it may appear on Valve's digital store. You can check out the game's Kickstarter pitch video after the break.

[Image: Jacob Janerka]
In this article: evil-sloth, indie, jacob-janerka, kickstarter, linux, mac, paradigm, pc
All products recommended by Engadget are selected by our editorial team, independent of our parent company. Some of our stories include affiliate links. If you buy something through one of these links, we may earn an affiliate commission.