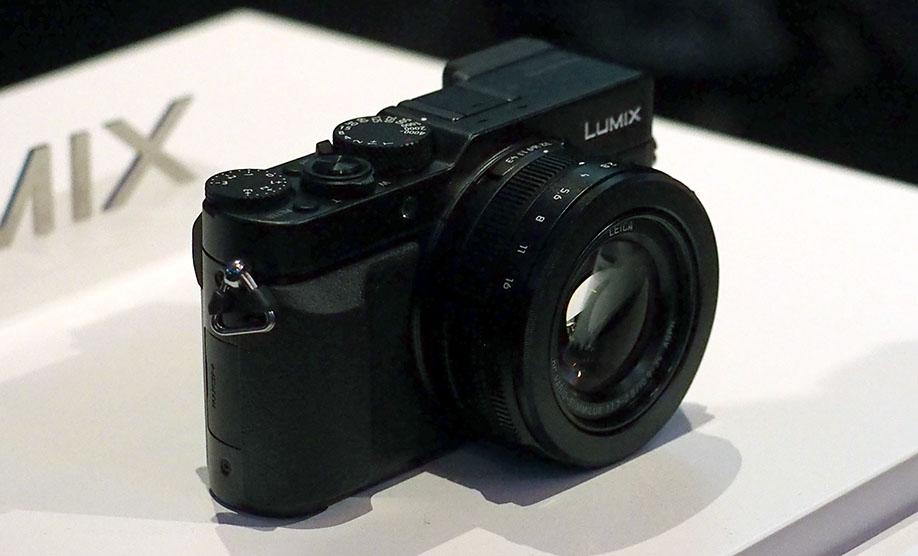 If you're thinking about buying Sony's sublime RX100 III compact camera, Panasonic has just made that decision a lot more difficult. The new $899 Lumix DMC-LX100 is leaps and bounds ahead of its LX7 predecessor and the most sophisticated compact the Japanese company has ever built. For starters, Panasonic has trumped the RX100's 1-inch sensor by equipping the new model with a Micro Four Thirds-sized, 12.8-megapixel MOS chip, the same size used on its big-boy interchangeable-lens models. Though it's cropped compared to its mirrorless models to allow for different aspect ratios, the sensor is still 50 percent larger than the LX7's 1-inch model. It's also got a fast Leica 24-75mm (35mm equivalent) f/1.7-2.8 lens, a wide-screen, 2,764K dot LVF (live viewfinder) and 4K video capture. Some of those specs put it on par with the company's flagship GH4, and well ahead of all its other interchangeable MFT models. It also borrowed the GH4's autofocus, boosting it over the LX7 to 0.14 seconds with an 11fps burst speed. Other features include WiFi, NFC capability for easier smartphone pairing, in-camera RAW to JPEG conversion and an (included) external flash. As mentioned, it has a "multi-aspect" feature that allows 4:3, 3:2 and 16:9 angles of view, which reduces the usable area of the sensor. Despite all that, the metal-bodied compact is only a hair bigger than the last model. The new "4K Photo" mode can also be used to capture 8-megapixel stills at up to 30fps, albeit in a highly compressed format. It claims that the much larger sensor combined with the relatively low 12.8-megapizel count will give the LX100 not only better depth of field, but superior low-light capability too. It now has a 25,600 max ISO instead of 12,800.

After trying the new model out at Photokina 2014 in Cologne, I was struck by its small size and weight. Given the very fast (and small), Leica Summilux zoom lens, it's an ideal walking-around camera that still affords full manual control. But are the LX100's controls too small for practical use? In a word, no. It's a small camera, so the manual dials are also small -- but I'd rather have those than touchscreen-only controls, as on certain Sony cameras, for instance. If you need larger dials and weight isn't an issue, get a bigger camera. Meanwhile, the new electronic viewfinder is very bright and detailed, another plus for its category. Lag is as good or better than any other compact on the market.

The Lumix DMC-LX100 is slated to arrive at the end of October, but Panasonic has yet to reveal the all-important price. For comparison's sake, though, the RX100 Mark III runs $800 and Panasonic's own LZ1000 superzoom (with a 1-inch sensor) is $900. The higher-res LVF, 4K and other specs also trump Panasonic's latest ILC, the GM5, showing that the compact market is from from dead -- instead, it's just heading upmarket.

Update: The price of the Lumix LX100 will be $899, which will give you more sensor but less lens than the Lumix FZ1000 for the same money. As it happens, the new CM1 cameraphone will also run that sum.

In this article: Compact, CompactCamera, DMC-LX100, Lumix, LumixLX100, LX100, MFT, MicroFourThirds, Panasonic, Photokina2014
All products recommended by Engadget are selected by our editorial team, independent of our parent company. Some of our stories include affiliate links. If you buy something through one of these links, we may earn an affiliate commission.