There are good cameras that look cute, take passable pictures and don't cost an arm and a leg. And then there are incredible cameras that can really do it all, but come along with comparatively astronomical price tags. The Sony RX100 is the latter -- the original model, which cost $650 and first appeared in 2012, was already wildly popular with camera enthusiasts, and 2014's version cashes in on two additional years of R&D. The result is a more capable point-and-shoot that's even pricier, at $800, but still worth every penny: It's the RX100 III. 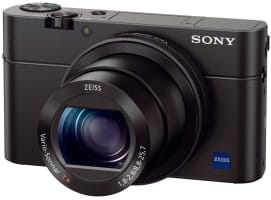 There are a few major changes in the third iteration. For some photographers, the most significant is the new pop-up OLED viewfinder that's available when you need it, but retracts completely into the housing when you don't. Sony removed the full-size hot shoe to accommodate the new EVF, but that's a trade-off few will mind. Another big swap is the new 24-70mm lens, which sports an f/1.8-2.8 maximum aperture range, giving you more bokeh and better low-light performance when zoomed all the way in. Finally, there's a new video codec on board, called XAVC S. On paper, it's not tremendously exciting, but it does result in some pretty spectacular video footage, rivaling what you'd get with a higher-end (and much larger) rig, assuming you add on the mandatory Class 10-plus SDXC card. You'll still get better performance from a top-of-the-line mirrorless camera or DSLR, but those aren't nearly as portable, and they're certainly not small enough to carry in your pocket. The RX100 is plenty capable, but its greatest strength is its size. While heavier than many other point-and-shoots, it's not much larger. Its powerful 24-70mm f/1.8-2.8 Vario-Sonnar T* zoom lens does make it quite a bit thicker than your run-of-the-mill compact, but assuming you can deal with a moderate bulge, it can fit in a pants pocket.

You'll more likely be dangling the RX100 III from your wrist, using the included band, or from a third-party neck strap (the requisite adapters are in the box). Despite its small size, however, the camera offers all of the necessary buttons and dials, including a dedicated mode dial, a video record button, a scroll wheel (for adjusting aperture and/or shutter speed) and a button for accessing the integrated WiFi mode, which lets you transmit images from the camera directly to a smartphone or a tablet. This time around, the greatest engineering feat is the pop-up electronic viewfinder. It's located at the far-left corner, and extends up about one inch when in use. The clever design includes a slide-out magnifier, complete with a diopter adjustment dial. The camera powers on as soon as you extend the EVF using the release switch on the left side of the housing, though it also turns off when you push it back down. Like most other EVFs, there's a proximity sensor that activates the finder and disables the LCD when you raise it to your eye. Of course, grazing the viewfinder with a finger or other appendage has the same effect, but you can simply push it back into the housing to eliminate the issue.

Because the EVF takes up quite a bit of space within the housing, Sony had to move the pop-up flash a bit to the right. It's now centered just above the lens, though it extends far enough to reach beyond the zoom, even at the widest focal length. Given that the flash has now taken over the real estate previously allocated to the full-size hot shoe, that component is a casualty of the RX100's redesign, though (as mentioned earlier) with the exception of perhaps a few hardcore shooters, it likely won't be missed. For a spell, Sony began including touchscreens with its mirrorless cameras, such as the NEX-5N, but newer models, including the Alpha 6000 and flagship A7s don't offer that feature. All three RX100 models also lack touch functionality, including this year's iteration, which may be a disappointment to some. On the other hand, no touchscreen means Sony needed to include a range of dedicated controls and dials, which ultimately work to improve the experience. The trade-off, of course, is that you can't tap to focus, which many shooters have come to count on when capturing video.

The user interface hasn't changed much since the original RX100. The menu layout is more or less identical, though there have been some slight cosmetic tweaks. The quick-access menu has been refined -- it's a bit more straightforward to use now -- but indicators and the camera's general workflow are consistent with past models. Like with the RX100 II, you can transfer images over WiFi using Sony's PlayMemories Mobile app for smartphones and tablets, but unlike competing products, you can't control the camera remotely. The first model in this series was lauded for its incredibly fast focusing, and the RX100 III performs just as you'd expect. It focuses very quickly, and it's accurate nearly all of the time. Focus hunting is perceptible, particularly with dim subjects when you're not using the AF-assist light, but if you miss a shot due to speed, the camera probably won't be to blame. Granted, it's not the fastest gun in the West, but it's definitely one of the best in its class. As with any compact camera with a power zoom lens, it takes a second or two to get the camera powered on and ready to capture its first shot. If you're anticipating an upcoming capture, it's best to leave the RX100 powered on -- once the camera's standing by, shutter lag is barely noticeable.

As for battery life, I took the RX100 on vacation and managed to get through three days of exploring without charging up. On average, I probably used the camera for a few hours each day, so if you tend to capture hundreds of shots and dozens of video clips during each day of touring, you'll need to charge up overnight. During that period, I was able to snap more than 500 stills and 13 minutes of 1080p/60 video, which was captured with the high-bit rate (and processor-intensive) XAVC S codec.

Since we're already on the topic of video, I'll start with some analysis there. The XAVC S codec available with Sony's latest cameras is a significant step up from AVCHD. Video looks great on the camera, of course, but when evaluating footage on a laptop, it's hard to believe this level of quality came from a camera you can slip in your pocket. The new f/1.8-2.8 lens also deserves some of the credit, I'm sure, but the improvement is clear. The one con is that you'll need to use a file converter to edit and output your footage using a computer. I used Pavtube ($35), which worked very well.

Unfortunately, once you convert footage and upload it to the web (with further compression), you lose a lot of that captured detail. The resulting clips, as you'll see in the footage reel above, look better than what you'd shoot with some other compact cameras, but unless you're maintaining that high 50 Mbps bit rate, you'll notice some degradation for sure. In the reel above, exposure was spot-on, and the RX100's integrated optical image stabilization helped keep things steady, even as I moved around. Moving on to still images, the RX100 exposed this late afternoon, backlit shot beautifully, with an aperture of f/4 and a shutter speed of 1/640 second at ISO 125. Details are very sharp and colors are accurate. This plate of cacio e pepe, a typical Roman dish, is slightly underexposed, at f/4 and 1/320 second, with a sensitivity of ISO 125. The camera may have been thrown off by the metal fork, but it's nothing a slight levels tweak in Photoshop won't fix. I saw dozens of tourists shooting tablet photos each day during my short trip to Rome. Moments like these come and go in only a few seconds, so this was a great test for the RX100. I was able to turn the camera on and snap a few shots as I walked by on the sidewalk. Details are sharp and colors are accurate in this 1/200-second, f/5 exposure at ISO 125. This is where gelato cups go to die. The camera opted for an exposure of 1/100 second at f/4 here, with a sensitivity of ISO 125. Details are sharp; colors are accurate; and the exposure is spot-on. Like the iPad shot above, this is another opportunity that came and went in only a few seconds. Fortunately, the RX100's speed enabled me to grab this sharp shot, at 1/50 second and f/2.8, with a sensitivity of ISO 125. The Pantheon is remarkably dim, yet the RX100 did a fine job of capturing this stranger with sharp details, assuming you're uploading for the web. In-camera processing counteracts the high sensitivity of ISO 6400, but results in softer details, as you can see in the inset of this 1/60-second, f/2.8 exposure. I returned from Italy just in time to capture this shot of New Yorkers making their way home after the July 4th fireworks. With plenty of vapor light, colors are accurate, believe it or not, though details are soft due to in-camera processing in this ISO 6400, 1/50-second, f/2.8 exposure. Given all of the features that Sony's managed to pack into the RX100 III, including a 1-inch sensor, an f/1.8-2.8 lens, an LCD that flips forward 180 degrees and that one-of-a-kind pop-up viewfinder, this is currently the only camera you can buy that includes that identical feature set. There are a few similar options on the market, though, with Canon's PowerShot G1 X Mark II offering the most comparable specifications while still maintaining a point-and-shoot form factor. That camera, also priced at $800, includes a larger 1.5-inch sensor and a longer 24-120mm f/2-3.9 zoom lens. And while there's no pop-up EVF, you can attach one to the hot shoe.

If you're looking for even more power, you're not going to find it in a pocketable form factor. Instead, consider stepping up to a mirrorless camera or a DSLR. Our mid-range pick in the mirrorless category, the Sony Alpha 6000, which also retails for $800, offers many of the same features as the RX100, such as an integrated EVF and plenty of hardware controls, with the added benefit of a larger APS-C sensor and interchangeable lenses. You should also consider purchasing last year's RX100 II ($650) or the original RX100 ($500) at a discount. Both are excellent cameras, and they're considerably less expensive than this year's model. When Sony launched its first RX100 back in 2012, we were very impressed. The camera offered tremendous functionality in a pocketable package. Then, when the RX100 II came around last year, Sony added WiFi along with a full-size hot shoe (which can accommodate high-end audio gear, among other accessories), besting the original model. This year's iteration is by far the most capable yet, with a superior lens, XAVC S encoding and a unique pop-up EVF. At $800, it's a significant investment, particularly within the point-and-shoot category, but if you need a ton of power in your pocket and you don't mind paying for it, you can't do any better than this.